After the game last night there was some very interesting banter tossed back and forth between Jose Mijares and Joe Mauer, all because of what happened in the game-changing at-bat of the seventh inning. With runners on the corners, two out, and the Twins leading 3-2, Prince Fielder ripped a 3-2 fastball into the right field corner for a two-run double that would give the game its final score.

What happened in that plate appearance seemed to kick off a little controversy. Mijares, who was in to face Fielder in relief of Scott Baker, missed on his first three pitches before working the count full, but he didn't like Mauer's pitch selection:

Yet Mijares pumped that 3-2 fastball right down the heart of the plate.

"Called for a fastball there," Mauer said. "I didn't call for it down the middle." 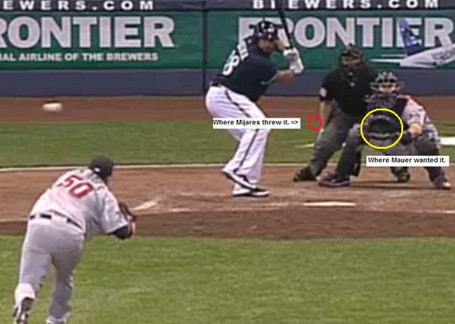 More after the jump.

In Mauer's called location, either Fielder walks, makes weak contact to induce out number three, or needs to get lucky for a hit. Missing over the middle of the plate, Mijares opened the door and invited the vampire inside. So to speak.

Why did Mauer call six consecutive fastballs? It's hard for me to say. It could be because Mauer just wanted Mijares to throw strikes early in the count, then needed him to at least try and get the out, and finally was looking to give Fielder something enticing but just off the plate. Maybe because, with the tying run on third, Mauer didn't want to chance a wild pitch or passed ball on an errant slider. After all, Mijares has had next to zero command all season, and this plate appearance was a shining example of that.

Mijares could have shaken Mauer off, but he didn't. Give him credit for trusting his catcher, but if he's going to trust his catcher then why call him out in the post-game? Trust the catcher, of course, but Mijares is a professional ballplayer, too. And he's the pitcher. If he isn't comfortable with six straight fastballs, or feels like his slider would work, then he needs to communicate that. And not in the post-game press conference.

I've seen people predicting that this would be Mijares' ticket out of Minnesota. While I generally agree with Jim Crikket in that both players need to take part of the blame for how that plate appearance with Fielder was handled, Mijares should have kept his mouth shut. But does he need to be sent down?

Strikeouts are way down while walks are through the roof. He's one of the worse relievers pitchers in baseball at stranding base runners. Line drives and quality contact are up. Velocity is down. Batters are chasing fewer pitches outside of the strike zone.

I've been a defender of Mijares here in the past. But I'm undecided on whether or not he should be sent down, although I do have a belief that Chuck James could come in and perform at least as well as Mijares (who owns a 4.15 ERA, but a 4.57 FIP and 6.08 xFIP).

But he shouldn't be sent down because he called out Mauer. It was inappropriate, and it shouldn't happen, but it's good to see that players aren't afraid to call out their teammates no matter who they are. Players always need to be free to challenge each other from time to time. It just needs to happen behind closed doors.

Now we wait. Will there be any fallout?

[EDIT] This has already been mentioned in the comments, but it's worth pointing out. Gardy also said this, per the link above:

We damn sure don't want Prince to beat us, and he did.

If you didn't want Prince to beat you, why did you even pitch to him? There was a base open, and Casey McGehee was coming up. McGehee is hitting .230/.284/.322 this season, and is terrible against both righties and lefties.

So we ask again: why even pitch to him?