Book Review: "100 Things Twins Fans Should Know & Do Before They Die", by Alex Halsted

Share All sharing options for: Book Review: "100 Things Twins Fans Should Know & Do Before They Die", by Alex Halsted 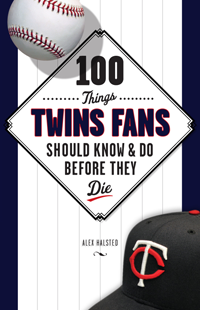 In 2002, spurred on by the USA national team's surprising World Cup run and my own unfulfilled soccer interest, I decided to become a soccer fan by picking out a team in the English league to follow. At the time, I could have named few, if any of the teams in the league, leaving aside actually selecting an appropriate team to follow.

I could have used a book like "100 Things Twins Fans Should Know & Do Before They Die," except for English soccer teams. For Twins fans, this book is basically an elementary primer in team fandom; it'd be perfect if you have a cousin from a foreign land who you are trying to turn into a Twins fanatic.

From the title, you might expect it's sort of a "bucket list" for Twins fandom. Instead, it's shorter on the "things you should do" aspect and long on the "things you should know." Think of it as 100 essays on different Twins-related subjects, from important players to memorable games to former stadiums. It's the kind of thing an overambitious blogger might attempt to do in a single off-season, before giving up around #22 and stretching the series over about six years. Given that the author, Alex Halsted, is himself a Twins blogger (he's written for GameDay Magazine and ran the now-defunct Twins-Territory.com), this is perhaps not surprising.

In a lot of ways, this book is similar to last year's "We're Gonna Win, Twins," which structured itself around the first 50 seasons of Twins baseball, with an essay for each season. However, there are differences; with Halsted being in his twenties, the book is perhaps understandably more focused on the past quarter-century of Twins baseball, rather than the first two or three decades. Early luminaries like Harmon Killebrew and Zoilo Versalles are covered, but Halsted is at his best writing about events that he personally remembers, like Game 163 in 2009.

If you're looking for criticism in this book, you'll be disappointed; the book could be displayed on the shelves of the Twins' offices without embarrassing anyone that was ever involved with the team. Carl Pohlad, a divisive figure to those of us who remember how close the Twins came to becoming the North Carolina Twins, gets an essay so glowing that you'd hardly know that he was for many years perhaps the most despised figure in the Twins organization among fans. Former owner Calvin Griffith may have been a casual racist and so miserly that he hurt the team, but his racist quotes are effectively glossed over and his cheapskatery is remembered with an almost affectionate-sounding story from Killebrew.

But it'd be wrong for me to dwell too much on this, because frankly, that's not what this book is about. It's not meant to be a coldly logical, clear-eyed reckoning of the good and bad of the Twins franchise. It's more like a primer for fledgling fans, more your fourth-grade American history textbook than the in-depth examination of America's prosecution of the Vietnam War that you had to read in college.

In particular, I enjoyed the essays regarding the "bit players" in Twins history. Essay #18 covers Bob Casey, the Met Stadium and Metrodome public address announcer that provided the soundtrack to live Twins baseball; the book features a photograph of Casey, wearing a football helmet in the booth, that may be worth the purchase price on its own. And the essay about collector and curator Clyde Doepner is perhaps the best of the book - a profile of a man I'd never heard of, but who indubitably forms part of Twins history (all while he tracks it through collectibles.) Also keep an eye out for the essay about Rod Carew's seven steals of home in 1969, which I really enjoyed.

This book, then, is mostly a pleasant, sunny ramble through the pages of the Twins record book. You're unlikely to sit down and read it cover to cover, but it's the perfect book to have sitting on the coffee table so that you can pick it up and flip to a random page and say, "Hey, I never knew Cesar Tovar played all nine positions in one game!"

For more on author Alex Halsted, or for links to purchase the book, visit alexhalsted.tumblr.com. I recently visited my local bookstore and found the book on sale there, as well, so I imagine it's also available wherever Twins literature is sold.

Also, we'll soon be running a few Twinkie Town contests, giving you a chance to win your very own copy of "100 Things Twins Fans Should Know & Do Before They Die". Watch this space for details.