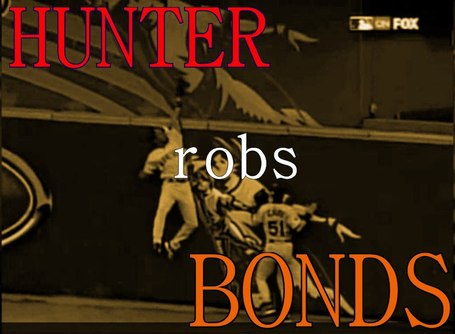 At the turn of the millenium, the Minnesota Twins fought off contraction by doing nothing more than winning baseball games. In a drastic youth movement over a very short period of time the organization brought in a catcher, first baseman, second baseman, third baseman, shortstop, left fielder, center fielder and designated hitter. In 2001, the veteran position player of the team was 29-year old right fielder Matt Lawton.

One of the cornerstones of that core of players was Torii Hunter. A gifted multi-tool athlete with killer cheekbones and a penchant for defensive acrobatics, Hunter, like many of his teammates, broke out in 2001. As a 25-year old Hunter launched 27 home runs and finished the season with 92 RBI, and came away with the first of what would be nine consecutive Gold Gloves. By positioning himself well and getting decent jumps, Hunter utilized his plus speed and athletic ability to make highlight reel catch after highlight real catch.

While the Twins and their unbelieveable run fell short in 2001, it immediately turned them into baseball's darlings. At the 11th hour they'd put together a team that was almost entirely developed internally, and it helped perpetuate the stereotype that so many people now despise about the Twins because it's not as true now as it was then: that the organization did the little things, played the game the right way, and was fundamentally sound. But it was that reputation that put Minnesota on display, and Hunter's seemingly limitless ability to convert outs he had no business converting epitomized that reputation.

With all of his Web Gems on ESPN, when 2002 opened everyone already had their eye on Torii Hunter. He homered in the first game of the season, and kicked off what was one of the most exciting first halves of baseball a Twins fan had seen in years. Torii launched nine homers in April, and cruised into the break with 20 homers, 21 doubles, 61 RBI and a .306/.347/.564 line. The nation bought into Hunter, and many of them also bought into the Twins.

As the starting center fielder for the American League in the All-Star game, Hunter was the first Twins starter since Kirby Puckett in 1995. And he gave the nation exactly what they wanted in the bottom of the first inning.

With two outs, Barry Bonds crushed a ball deep to center field. If you aren't familiar with the play you can probably guess what happened. And if you have seen it, well, enjoy it again.

With that the legend of Torii Hunter was originally born. He robbed Bonds, who had become one of the greatest spectacles in professional sports by hitting an unbelieveable 73 home runs the season before, on a national stage. Bonds then ate Hunter as a post-play snack.

Hunter would go 0-for-2 in the game, but it hardly mattered. This was what everyone came to see.