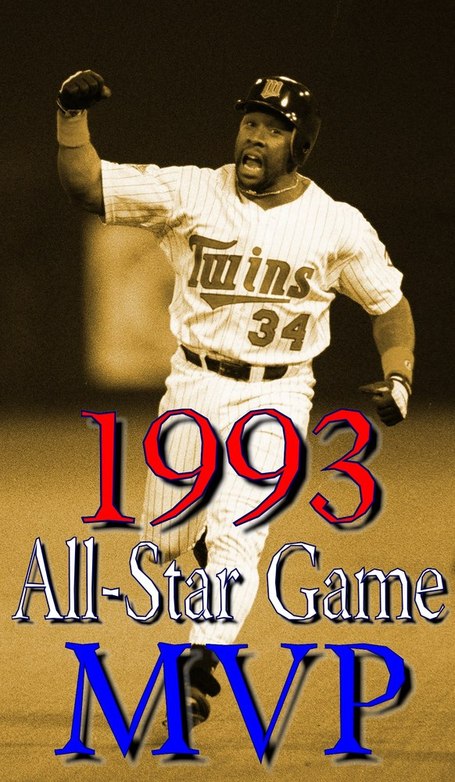 There's always going to be a bit of sadness when I think of Kirby Puckett, because of how his career and life were brought to premature ends. But there will always be the good times, all of the great memories I have of Kirby, from the laugh and smile to the good he did on the field and in the community, that will be my lasting impression of Puckett. And I think that's the case for most people.

In twelve big league seasons, Puckett made ten consecutive All-Star teams from year three through year twelve. He started in six of them ('86, '89, '92, '93, '94, '95), starting along side 80s juggernauts Rickey Henderson and Dave Winfield in his first, and Indians stars Kenny Lofton and Albert Belle in his last. Here's a fun fact: from 1992 to 1994, the AL starting outfield was Puckett in left, Ken Griffey Jr. in center and Joe Carter in right.

Of all Kirby's All-Star appearances, one stands out above the rest.

Batting sixth for the '93 AL squad, in front of Puckett was Griffey surrounded on each side by two Blue Jays. Toronto had a great team in those years, and this season they were led by Paul Molitor, John Olerud, Roberto Alomar and the aforementioned Carter. But it wouldn't be any of the Jays, nor would it be the great Griffey, it would be Puckett who kicked off what would eventually be a route of the NL club.

Down by two in the bottom of the second, Puckett took Terry Mulholland (seriously, apparently he started due to his 9-6 record and 2.72 ERA at the break?) deep for a solo blast that cut the National League's lead in half. Roberto Alomar would later homer to knot the game at two, where it would stay until the bottom of the fifth, when Puckett would again play a key role in the outcome of the game.

In the bottom of the fifth inning, John Burkett took the hill for the NL. He'd eventually finish the season with 22 wins and finish fourth in Cy Young balloting, but in his first All-Star appearance (he'd make it again with Atlanta in '01) he was deconstructed by baseball's best hitters. Ivan Rodriguez led off the frame with a double, before Burkett induced a grounder from Alomar. Belle and Griffey then delivered back-to-back singles, scoring two and advancing bases on an error and a throw. Two batters later Cecil Fielder was hit by a pitch, setting up a first and second situation for Kirby.

Puckett delivered, smacking a double to continue the rally and pushing the AL's lead to 5-2. That hit was the fourth of the inning and chased Burkett, with Steve Avery coming on in relief.

In the top of the sixth, Greg Vaughn would take over in left for Kirby. But that damage was already done, and the game essentially over. The AL would chase Avery in their own half of the sixth, and would add more runs on a pair of wild pitches from John Smoltz. The game ended 9-3.

Puckett had a few good mid-summer classics, but none matched his '93 performance. His home run put the AL on the board and his RBI double capped a big rally that gave his squad a big cushion. With a pair of extra base hits and a pair of runs batted in, Puck was awarded the All-Star game MVP award.

Thanks for the memories, Kirby. This was one of the great ones.

BONUS: Did the AL's winning ways have anything to do with Randy Johnson's early-game intimidation tactics?