Share All sharing options for: NL 5, AL 1: Cuddyer's All Smiles 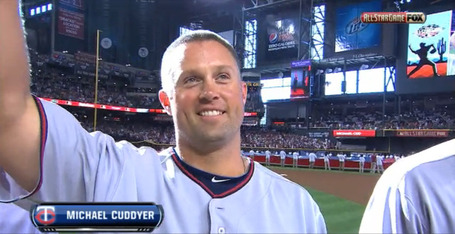 In the introductions to last night's game, the crowd in Phoenix booed pretty much everyone. But there were some moments of applause, and Michael Cuddyer was given the honor of recieving one of those few cheers. He clearly took in the moment and appreciated being there to represent the Twins, and seeing the look on his face I can't imagine anyone else I'd have rather seen at the game. I love Cuddyer as a Twin, and I couldn't be happier for him.

The National League did come away with the win, although I won't bore you with most of the details. I will, however, summarize Cuddy's evening.

Cuddyer took the field in the bottom of the seventh and took over at first for Miguel Cabrera. He'd take a couple of relays in the eighth for two outs, but there wasn't any real challenging moment for him in the field. His real excitement came in his lone at-bat.

In the top of the ninth, with the AL trailing 5-1, Carlos Quentin and Matt Joyce reached and advanced on a combination of errors and a single. Joel Hanrahan was replaced by the Greek God of War Brian Wilson, whose first batter was to be our very own Michael Cuddyer. Cuddyer's job was clear: get on base and extend the game. With one out and runners on second and third base, a single would put the AL within striking distance to tie.

Cuddyer took a cut at Wilson's first offering and skied it into right field. Jay Bruce settled under it for out number two, and it wasn't hit far enough to advance either runner.

So, certainly not the outcome anyone here would have wanted, but it hardly matters. It was great to see Cuddy get a few innings in, and I'd rather he have come up in that situation and repeat the results than not see him come up at all.

We'll have our last two Top 10 Twins All-Star Performances later today. After that we'll be back to focusing on Minnesota's upcoming run to another division title.