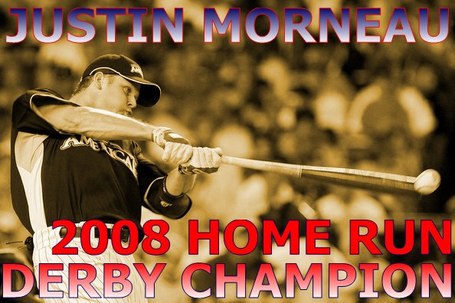 Since the Home Run Derby took it's official form in 1985, the Twins have had six participants. Tom Brunansky took second place in '85 with six homers; Gary Gaetti was the only player to not hit at least one homer in '89; Torii Hunter hit three in '02 but failed to get out of the first round; Justin Morneau hit four in '07 but also failed to get out of the first round on a swing-off; Joe Mauer hit five in '09 but also missed the second round on a swing-off. The only truly successful appearance by a Twin in the derby came from Morneau, in his second of back-to-back appearances, in 2008.

Morneau came into the break hitting .323/.391/.512, with 14 homers, 21 doubles, and 40 walks versus 55 strikeouts. He'd also driven in an impressive 68 runs. In the All-Star game itself, he'd play a pivotal role by going 2-for-4 with a double and an intentional walk, all after taking over at first for Kevin Youkilis in the top of the sixth. Yeah, four at-bats in spite of entering in the top of the sixth, because this game was looooooooooonng.

In a low-scoring contest the National League went up 2-0 with single runs in the fifth and sixth. But in the bottom of the seventh Morneau led off with a double off Edison Volquez, kicking off the American League's rally, as three batters later J.D. Drew smashed a frozen rope line drive into the seats to tie it up.

Both squads would swap a run in the eighth. They would then take that 3-3 score into the fifteenth inning. Both clubs had opportunities to score but were thwarted on each occasion, including the AL's failure with bases loaded and no outs in the tenth, and the NL's own bases loaded failure with one out in the twelfth. But that fateful fifteenth would come.

Morneau led off with a liner into center off Brad Lidge, and 14 pitches later was standing on third with the bases loaded again and one away. Michael Young then lofted Lidge's first pitch into right field. Corey Hart's throw wasn't good enough, as Morneau's slide allowed his foot to get across home just before Brian McCann's tag.

As great as that was...and it was pretty great...it was only half of what made the '08 All-Star break so great for Twins fans. The other half was Morneau bringing home the Home Run Derby hardware.

Instead of saying it all again, here's part what I wrote in the derby recap:

In the first round of Monday's Home Run Derby, it was the Josh Hamilton show. Last to step to the dish in the field of eight contestants, he needed to hit seven home runs to move onto round two.

Shattering the record set just a couple of summers ago by Bobby Abreu, sphere after sphere jumped off the bat of Hamilton, as he rained down a shower of balls into the right field seats. As his turn dragged on for over ten minutes, it wasn't boredom that set in throughout the stadium. It was awe. Fans and All-Stars alike took to their feet as one after another, baseballs disappeared into the New York night. Majestic, powerful and impressive arcs scorched the skies, and when all was said and done, the Ranger outfielder had written a place for himself in the history books.

With eight home runs in round one, which tied him for second most in the round with Lance Berkman, our own Justin Morneau made the cut to the final four. With totals from the first two rounds being combined, it meant there was only one spot available in the finals between Morneau, Berkman and Milwaukee's Ryan Braun, who had hit seven in the first round. Josh Hamilton's 28 assured him a place in the finals.

Berkman managed another six before using his outs, meaning Justin had to hit seven in round two. He hit nine. This meant Braun would need 10 to tie and 11 to make it to the finals, but he fell a few short. Last to take to the plate in round two was Hamilton, who really didn't need to hit at all. But he did, and he dropped another four balls into the seats before calling it a round after just four outs. Justin Morneau was heading to the Derby finals with Josh Hamilton, who had just out-homered him nearly 2-to-1...with six fewer outs.

Justin went first, and managed to launch five, pacing himself over his ten outs. Because the final round numbers don't include totals from the first two rounds, it meant that Hamilton needed just six to take home the trophy. Watching the contest, while you hoped that he had worn himself out in the first round it wan't much comfort after seeing his display of power. But that's exactly what happened. Hamilton managed just one home run by the time he tallied three outs; two homers through five outs; and three homers by seven. After crushing the competition into oblivion in round one, Josh Hamilton could only manage three in the finals.

It was a fantastic contest, and if I'm honest, had a climax and finish that I did not expect. Morneau finished the night with 22 home runs, six fewer than Hamilton hit in just the first round, but it was enough to win him the trophy. Home Run Derby champions are few and far between for any franchise, and I'm proud to call Justin Morneau a Minnesota Twin.

Congratulations, Justin! You won tonight, and you earned it!

And with that, our number one Twins All-Star performance is all that's left in our series.