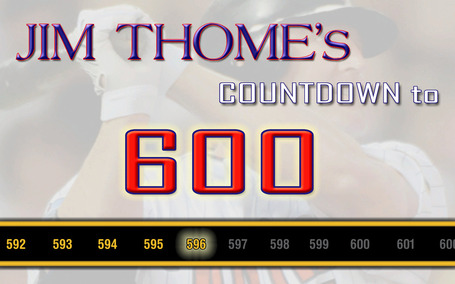 On a swealtering afternoon at Target Field in which the Heat Index was well over 100 degrees, it couldn't have been easy for the guys as they took their positions on the grass. Hydration was key and the pitchers tried to be efficient to get their defenses off the field as quickly as possible. But after a pair of first inning runs from both the Twins and the Royals, the game hit an offensive lull.

Felipe Paulino and Brian Duensing matched zeroes over the next four-and-a-half innings, until Jim Thome stepped in with two on and two out. On a full count Paulino finally made the one big mistake we'd all been waiting for him to make, and hung a fat slider. Thome blew it up, launching in 490 feet into the Minneapolis sky. It's the longest home run at Target Field to date.

Be sure to check out our caption contest over at our Facebook page. And of course the rest of our recap, after the jump.

Following Thome's historic blast, the Royals finally got to Duensing again. Billy Butler doubled to lead off the inning, and Jeff Francoeur would homer to bring Kansas City within a run. But Alex Burnett disposed of the last two batters to finish off the frame and preserve the lead.

In the eighth it was Glen Perkins with another perfect performance, and in the ninth Joe Nathan came on for his second save in as many nights and his third game in a row with an appearance. Butler and Eric Hosmer (who had a couple of really nice defensive plays) popped out, and Danny Valencia made a good play to end it on a Francoeur grounder.