If you were a Tigers fan, or just a general fan of baseball who enjoys watching the game for its own sake, you probably loved this game. Justin Verlander was as sick and as filthy as I can recall seeing him, as he positively decimated the Minnesota Twins. He wasn't perfect - he did allow a run, and the leadoff triple by Michael Cuddyer in the second looked promising too - but it hardly mattered. The Twins couldn't solve him.

Part of what made Verlander so difficult to figure out was his location. While his fastballs covered all parts of the plate, he clearly had a game plan when it came to everything else. Inside Edge posts brilliant post-game reports, which allows me to show you this brilliant illustration. 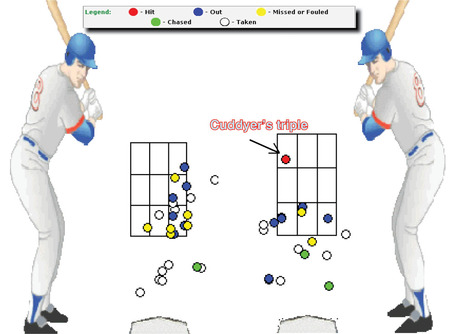 Against left-handed hitters, Verlander's strategy of low-and-away clearly worked. Against right-handed hitters he just pounded everything down in the zone - except for the slider that got away. Cuddyer crunched that one. Interestingly, the only other hit from a righty off Verlander was also off the bat of Cuddy, who clubbed the high fastball to drive in one of the Twins' two runs.

There wasn't much else to write home about in this one. It was all Tigers for the most part, barring a couple of few-and-far-between moments. Carl Pavano wasn't at his best, but with one run already in and the bases still juiced in the fourth he caught a come-backer and turned a double play. Joe Mauer made one hell of a diving stop at first base in the third. But that's it.

Pavano allowed five runs through six innings, and Chuck James was hit hard until the final two plate appearances of his two innings of work when he picked up back-to-back strikeouts. Twins batters not named Mauer or Cuddyer went a combined 2-for-25.

Let's pack it up and move along to tonight, shall we?