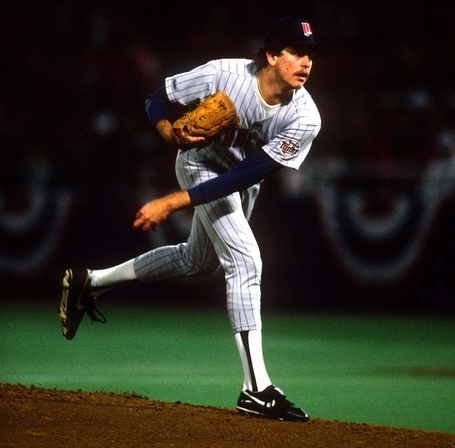 When the Twins drafted Frank Viola out of St. John's University in the second round of the 1981 draft, they drafted him knowing they needed pitching help in relatively short order. In the shortened '81 season the team had finished in last place in the AL West, winning just 41 of the 110 games they played (.373). The entire team was in need of a quick refurbishment, and the rotation was certainly one of the big priorities as the crew from '81 weren't going to get the team anywhere.

Pete Redfern was a first-overall pick in '76, but he was a bust and not long for the baseball world. Fernando Arroya was a swingman who was a swingman because he wasn't particularly good at starting or relieving. Albert Williams, Roger Erickson and Brad Havens weren't terrible but were classic filler material, with both Williams and Erickson to be out of the game in a couple of years. Jerry Koosman, who had won 20 games for Minnesota in 1979 in spite of having less impressive numbers than he had in '77 for the Mets when he lost 20, was dealt to the White Sox in the middle of the season.

Viola took a couple of seasons to settle in, but he made his Major League debut the year after he was drafted. By 1984 he was ready for a breakout season, winning 18 games for a team that won just 81 but finished in second place: the highest they'd finished since 1970.

By 1988 Viola had made a name for himself, especially in Minnesota, finishing with Cy Young votes in both '84 and '87, not to mention a World Series ring. In '88 he would win his Cy Young, and earned the start in the All-Star game by finishing the first half with a 14-2 record thanks in no small part to a 2.24 ERA.

Viola would get the win, thanks to throwing two perfect innings to kick off the contest. And while it's never an easy task to keep All-Star offenses off the board, Viola had his work cut out for him.

Vince Coleman: He was in the middle of his fourth (of what would be six) consecutive season in which he'd steal the most bases in baseball. He'd already stolen 45 bags by the break, and he'd stolen 326 over the last three seasons. He flew out to Rickey Henderson.

Ryne Sandberg: Sure, he had a very un-Sandberg like season. But it was still Ryno. Viola caught him looking.

Andre Dawson: This was Dawson at his peak. He'd led baseball with 49 homers in '87, and won the NL MVP in his debut season with the Cubs. He grounded out to Wade Boggs.

Darryl Stawberry: In his fifth consecutive All-Star game at age 26, he would lead the NL in homers this season. He grounded out to Paul Molitor at second.

Bobby Bonilla: In the first of six All-Star games, Bonilla was a great all-around batter. He grounded out to Cal Ripken Jr.

Will Clark: In just his third season, a 26-year old Clark would lead the NL in RBI and walks. His fate was the same as Bonilla's.

It wasn't the flashiest of performances, this is true. But that shouldn't take away from what must have been one of the most difficult tasks of Viola's career. None of them were one-and-done wonders, and in fact all of them could easily be dubbed generational greats. Viola's performance set the tone for the American League, who would go on to win 2-1 under Tom Kelly.

At the trade deadline the next season, in 1989, the Twins would flip Sweet Frank Viola and that wicked 80's 'stache to the Mets. Coming back were Rick Aguilera, Tim Drummond, Kevin Tapani and David West. If you're going to trade a World Series, Cy Young winning pitcher in his 20s, that's not a bad return.