This time of year there are so many rumors it's hard to keep track of what's what or who's telling the truth. One rumor crops up, someone else denies it or changes the details, names start to crop up and eventually it all becomes one muddled amalgamation of truthiness. Of course this all relates to our Twins in terms of the Denard Span trade talk, which has been driving all of us various degrees of bananas.

There's no doubt that my reactions started in a stage of denial. The Twins have no reason to trade Span, the Nationals aren't offering enough anyway, yada yada yada. Not much had changed for me by Tuesday. By Wednesday the rumor had changed its shape, and while I still believed the Nationals were dreaming at least things started to appear at least quasi-realistc. Yet I wasn't really into the idea, and so when LEN III noted that "the Twins are not shopping their leadoff hitter" and that Washington was also "evaluating Ben Revere and CFs in the Twins' farm system" I was momentarily put at ease.

But after continuing action over the last two days, albeit with minor shifts and re-shifts in details, it's clear that there has been dialogue between Minnesota and Washington. It also bears understanding that "not shopping Span" does not mean "not taking offers on Span". Because it's almost certain that the Twins are fielding offers. 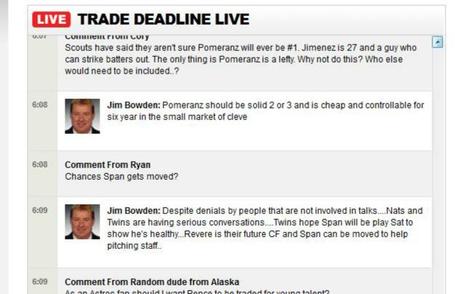 As bbeck noted yesterday, Bowden was heavily involved in ESPN's live trade chat over the last few days. If you read bbeck's FanShot, you'll also see that Bowden said "there is truth to a Nats/Twins trade discussion that includes Storen, Bernadina, Span, Gibson and others."

Part of me understands that Bowden has his sources, and that a portion of what he says is probably very accurate. But if we analyse the information he gives us here, he may as well still consider himself the GM of the Nationals. Drew Storen for Denard Span isn't enough, but he's also tossing in Minnesota's top pitching prospect and somebody named Roger Bernadina? Nobody outside of Washington has heard of Roger Bernadina, and for good reason. He's a .243/.308/.360 hitter in 845 MLB plate appearances. He's 27.

And he's an outfielder. You know, the position of most strength in the Minnesota farm system. Aaron Hicks, Ben Revere, Joe Benson, Oswaldo Arcia, Max Kepler-Rozycki, Eddie Rosario, Rene Tosoni: seven of Twinkie Town's top 20 prospects coming into 2011 were outfielders. How would trading one of baseball's best leadoff hitters for a quadruple-A outfielder make sense in any way, shape or form?

It doesn't. Which should lead us to one of three conclusions.

Right now it's just important to not jump to conlusions. Keep in mind that, as usual, these rumors aren't coming from anyone in the Minnesota front office. They've come from reporters (who state that the Nationals are the side expressing interest), from a baseball pundit who used to be the GM of the Nationals (Bowden), and from a Twins beat reporter who says the Twins aren't shopping Span (LEN III) which means they understand that they are in a position of strength.

Minnesota isn't looking to unload Span. The Nationals are going to have to come and get him. And if the best they can offer is Storen and Bernadina for Span and Gibson, then it's just not going to happen. Take that to the bank.