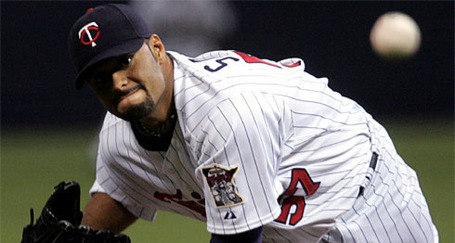 In 2007, Johan Santana was representing the Minnesota Twins in the mid-summer classic for the third season in a row. He'd recorded good performances in both '05 and '06, getting in a run-free inning on both occasions. But in '07, in his last All-Star game as a Twin, Santana delivered the second-best pitching performance on our list.

Ken Griffey Jr. gave the National League All-Stars a quick lead with a first inning grounder into center field, scoring Jose Reyes. For the next few innings the score remained 1-0, until Ichiro Suzuki ignited the crowd at AT&T Park with an inside-the-park home run, scoring a pair. A Carl Crawford solo shot in the sixth made it 3-1.

But the National League would strike back in the bottom half of the frame, as Griffey would drive in his second run of the game to pull his squad within a run. And as the American League went 1-2-3 in the top of the seventh (including a Torii Hunter fly out), it was Santana's job to put a halt to the NL's momentum.

Carlos Lee was in his first year with that massive contract the Houston Astros gave him, but he was still one of the game's most dangerous batters. Through the break he had a decent 16 homers, but also 25 doubles, 73 RBI and an identical 34 walks and strikeouts. Power hitters who don't strike out too often are a rare breed of power hitter indeed, but that's exactly what happened. Santana nailed Lee on four pitches.

Just like Lee, Alfonso Soriano was also with a new team. In his first season with the Cubs, an astonishingly torrid June and July left him with a .310/.353/.535 triple slash, including 15 homers and 24 RBI. But unlike Lee, Soriano had no plate discipline. Santana threw a temporal anomaly and caught Soriano looking, striking him out on three pitches.

Jose Reyes, in his second All-Star game appearance, wasn't going to wait to be struck out. He had 46 steals at the break, but he wouldn't get a chance to use that speed against Santana as he grounded out to Carlos Guillen on the second pitch of his plate appearance.

When Johan came onto the hill the AL had a 63% chance of winning the game, and by the time he left that had increased to 74%. The American League would go on to win 5-4, and Santana's seventh inning was an impressive way to bridge the gap to the closers.

And with that, here's the promotional video for the 2007 All-Star team. You may recognize a couple young men in Twins jerseys.