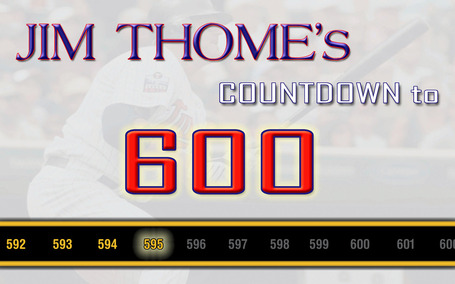 I just wanted to take a moment to bring up a few names that were Jim Thome's comtemporaries. Guys like Ken Griffey Jr., Albert Belle, Greg Vaughn were all rookies the year Thome was drafted, and now that Griffey is gone he's outlasted them all..

But the guys below were all drafted in 1989, along with Thome, and in fact all of them were all drafted in front of him. Well, they're all out of the game, too. The first five are Twins draft picks, just for reference. The remainder of the list represent the best of the '89 draft with Thome.

Thome's out-lasted them all. And as long as the Twins can keep him healthy, he'll likely jack career home run number 600 before the calendar turns to August.

A career like the one Thome has had is a very special one. It takes a wold of talent, longetivity, and plenty of luck to stick around Major League Baseball this long. And part of what makes this approaching milestone so great is that you know for a fact that Thome appreciates every game.

We'll keep track of each of Thome's upcoming homers with a graphic similar to the one above; it'll be our way of celebrating along with him and the Twins. He'll have another chance at it tomorrow, but until then enjoy the rest of your Independence Day. Happy Fourth!