Three years after Frank Viola gave the Twins one of their best All-Star performances ever, one of the pieces he was traded for was making another big impact. Viola's trade had made room in the rotation for Rick Aguilera, but at the end of the season veteran closer Jeff Reardon was moving on. In the spring of 1990, Aguilera was tabbed as Reardon's replacement. He paid immediate dividends.

In his first summer as a full time closer, Aguilera saved 32 games for a Twins squad that won 74, striking out 61 in 65.1 innings en route to a 2.76 ERA. The baseball world sat up and took notice of of the late-20s pitcher with the immaculately trimmed beard, and in his second summer as Minnesota's closer he was representing the team (along with some guy named Kirby Puckett and a no-name pitcher by the name of Jack Morris) in the mid-summer classic. 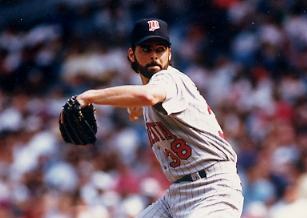 Puck would go 0-for-1 in the game, and Morris (who got the start) would allow four singles and a run in his two innings of work. Aguilera would do just a bit better.

With the American League clinging to a 3-2 in the seventh, thanks to a three-run homer from Cal Ripken Jr. in the third, Aguilera was called upon to replace familiar Red Sox closer Jeff Reardon. Reardon had picked up back-to-back groundouts from Benito Santiago and Barry Larkin, but a Tony Gwynn single meant it was time for a change.

Juan Samuel welcomed Aguilera to the game with a single into left, moving the tying run to second base. But Aggy struck out future Hall of Famer Eddie Murray, in the last All-Star at-bat of his incredible career, to end the threat.

Tony LaRussa would stick with Aguilera in the top of the eighth, and the Minnesota closer didn't disappoint. Felix Jose would manage a one-out single, but Paul O'Neill (in his first All-Star game) and Howard Johnson (like Murray, also his final All-Star at-bat) both fell victim to Aguilera and his nasty stuff.

Or they were hypnotized by his supremely shaped facial hair. You make the call. Whatever the case, the AL beat the NL 4-2 with Dennis Eckersley getting the save for his work in the ninth. But the biggest out, and the NL's final rally, was snuffed out by our own bearded wonder.

Aguilera's performance in the '91 All-Star game, the first of three consecutive he'd make with the Twins, is the best pitcher performance on our top ten list. Coming up tomorrow is performance number seven, and it's all position players from here on out.