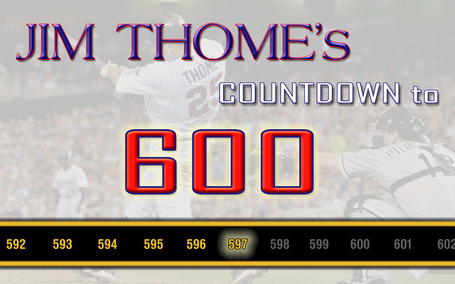 As goes the Twins pitching, so go the Twins as a team. On Sunday afternoon the Twins spotted Carl Pavano a 3-0 lead after scoring a pair in the first and one in the third. Ben Revere led off the game with a triple before scoring on a Joe Mauer groundout, and Michael Cuddyer later scored on a Texas Leaguer off the bat of Danny Valencia. Jim Thome blasted a solo shot in the top of the third inning to put Minnesota up 3-0. It was Thome's eighth home of 2011, and of course it was the 597th of his career.

But just like Blackburn on Saturday, Pavano just didn't have it on Sunday. After having runners on the corners with two outs in the first, he managed to escape damage thanks to a terrific catch from Cuddyer, who was playing second base. Cuddyer ranged back into not-so-shallow right-center field, extended his arm and just barely managed to corral the ball into the tip of his glove. Although it was a great play, sadly it was only a reprieve.

It was the third inning that we saw everything catch up to Pavano. After picking up a groundout to kick off the inning, the A's picked up seven consecutive hits. It was cringe-worthy to watch. Two doubles, fives singles and a pair of stolen bases later, that three-run lead turned into a three-run deficit. And the A's wouldn't look back.

The Twins had an opportunity to make it a game again in the seventh. Down 7-3 at this point, a Mauer single was sandwiched by walks from Revere and Jason Kubel. But Thome struck out with the bases loaded to end the inning. Mauer's two-out single in the ninth was unable to ignite a rally.

With the loss the Twins drop to seven games out of first place. If the Twins don't go on another run like they did in June, and very soon, the season will be lost. Oakland was a great opportunity to kick off such a stretch, but it's not much of a surprise that the opportunity was blown. But it's not over yet, and tonight starts yet another opportunity for Minnesota to take care of their business.

Mauer: 3-for-5
Thome: 3-for-4, HR, bummber about the K in the biggest situation though
Dumatrait, Capps, Nathan: 4.0 innings of no-run baseball