Francisco Liriano left today's game with a left posterior shoulder strain. It's unfortunate for any number of reasons, but it's hard at this point to have any other attitude besides "It figures". He completed two innings, but was never really on his game. Liriano struck out a pair but allowed two singles and two walks in the second inning, the second free pass scored the one run the Orioles scored in the frame. 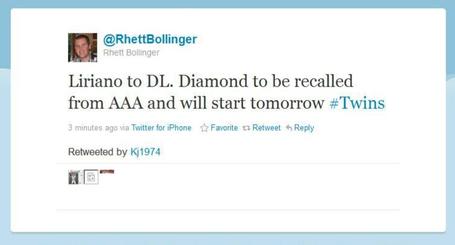 Unfortunately, the shoulder strain will send Liriano to the disabled list. I have no doubt that we've seen the last of him this season. There's no reason to bring him back at this point, and it's a philosophy I'd start carrying over to the rest of the squad over the coming weeks. If Mauer and Morneau are sore, shut them down. Play Drew Butera and Chris Parmelee. I'd love to see an outfield of Ben Revere, Denard Span and Joe Benson.

The reality of the season is that we're at the point where looking forward to 2012 is in the best interest of the club. Forcing stars onto the field because they "should" be there isn't going to make this year look any better, and it can't help the team's prospects beyond the next few weeks.

More on the game after the jump.

Today's effort was once again poor, although it's hard to put too much blame on Anthony Swarzak. He's been stellar in his role for a vast majority of his season, but his afternoon ended after three and a third having allowed five runs off eight hits and a pair of walks. A big three-run blast from Mark Reynolds put the nail in the proverbial coffin of the series, sealing the four-game sweep.

Scott Diamond will be recalled from Rochester to make tomorrow's start versus the Tigers. Diamond made one spot start for the Twins on July 18th, allowing four runs (three earned) to the Indians over six and a third. In 23 starts at triple-A the lefty hasn't been anything better than mediocre, tossing 123 innings of 5.56 ERA ball. He's been destroyed in four of his last five starts for the Red Wings, allowing 29 runs (26 earned) in 24.2 innings over that span. Yikes.

Stay tuned as the trainwreck continues! Luckily September is but a few days away, and we can focus on the future (more than we already are).

OT: I've been back in America for a week, and I've already experienced my first earthquake (I didn't actually feel it here in Boston, but apparently some people did), and I'll be experiencing my first hurricane on Sunday! This year just keeps getting better and better...

Justin Morneau: Once again drove in the team's only run with another RBI double. He was 2-for-3 with a walk.
Trevor Plouffe: He needs to play everyday at some position. Two more hits today, including his ninth double of the year in less than 160 at-bats.
Luke Hughes: 1-for-2 with a pair of walks.
Alex Burnett, Matt Capps & Jose Mijares: Combined for 3.2 scoreless innings...and Mijares' ERA dropped to below five for the first time since July 22.

Anthony Swarzak: Gave the team a few much needed innings, but sadly couldn't keep the contest close.
Jason Kubel & Jim Thome: Both claimed off waivers and both playing, but went a combined 0-for-8.