Share All sharing options for: Where Will the Twins Draft In 2012?

Yesterday, MLB Trade Rumors updated their reverse standings. For anyone who is unfamiliar with reverse standings, essentially it's an easy way to look at what the pecking order in next June's draft will be. It shows us which teams have protected picks (like the Twins), and which slot teams may end up in. Here's the list as of this morning. 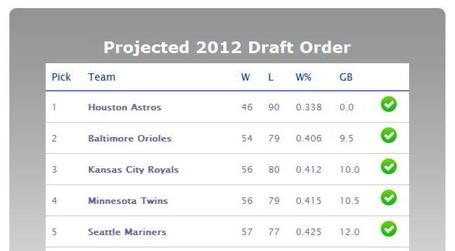 If the season ended today the Twins would have the fourth pick in the draft. The Royals also lost last night, otherwise we'd be on pace to draft third overall. Of course, it would also mean the defending AL Central Champions would be in the AL Central basement, but at this point where you finish isn't nearly as important as what you do about it this winter.

At least that's how I'm consoling myself through my tears.

Nobody is going to steal the number one overall pick from the Astros this season, who are a lock to lose more than 100 games and will be the only team in baseball to do so. But as you can see, the Twins are just one game from having the number two overall pick in next summer's draft (and being the worst team in the American League). The Pirates, currently set to draft 10th (after leading their division this season...wow they fell apart fast), are six games ahead/behind the Twins.

It looks like the Twins will draft somewhere between number two overall and, if the Twins go on an unexpected hot streak, maybe tenth overall. But I'd guess not lower than seventh or eighth.