Twins to Draft Second Overall In 2012?

Share All sharing options for: Twins to Draft Second Overall In 2012?

In my continuing quest to stay optimistic about my favorite baseball team, you've probably noticed that I tend to talk about the future quite a bit. Continuing on that theme, a couple of weeks ago we looked at where the Twins were placed in the draft order and how that might change in the coming weeks. Specifically, I said:

But as you can see, the Twins are just one game from having the number two overall pick in next summer's draft (and being the worst team in the American League). The Pirates, currently set to draft 10th (after leading their division this season...wow they fell apart fast), are six games ahead/behind the Twins.

It looks like the Twins will draft somewhere between number two overall and, if the Twins go on an unexpected hot streak, maybe tenth overall. But I'd guess not lower than seventh or eighth.

Well, it turns out that our boys haven't ha that unexpected hot streak. And while I know it's hard to wake up in the morning and see another loss in the box score, right now it's not about results for me. It's almost as though these games are spring training games. It's more about how guys look, how the veterans focus and how the younger and more inexperienced players handle themselves against stiff competition.

Of course that has more to do with next year than this year. This year, those results do matter. And so, without further ado, it looks more and more likely like Minnesota will have that number two pick after all. 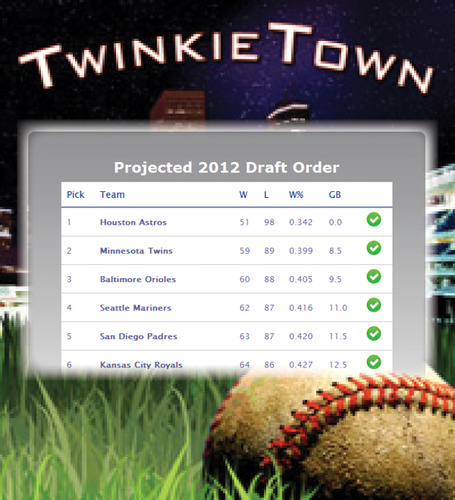