I'll make this quick because I realize this is exceptionally late. Turns out the Angels forgot what a strike zone looks like, walking in four runs thanks to four (yes, FOUR) free passes with the bases loaded. The Angels had so much trouble finding the strike zone, in fact, that Minnesota (27th in taking walks in Major League Baseball) took nine (yes, NINE) bases on balls.

Trevor Plouffe, Luke Hughes and Danny Valencia combined for six hits and four walks, doing their best to look like they belong in the infield next season. Plouffe's first inning solo shot put the Twins up 1-0 early, while a five-run fifth inning included back-to-back RBI doubles from Hughes and French Resistance Fighter Rene Tosoni. Tyler Chatwood was chased early, and Fernando Rodney would completely implode late to ensure that there would be no Angel comeback.

Carl Pavano, meanwhile, was solid. Seven hits, four runs (three earned), four strikeouts and no walks over six and two thirds are all great from Carl, but he was the best possible version of himself. He was around the strikezone all night, recording 83 of his 118 pitches for strikes (70%), but he did it his way: by picking up chase swings outside of the strike zone.

This is a chart of all non-fastball pitches from Pavano last night, with green circles constituting chase swings. 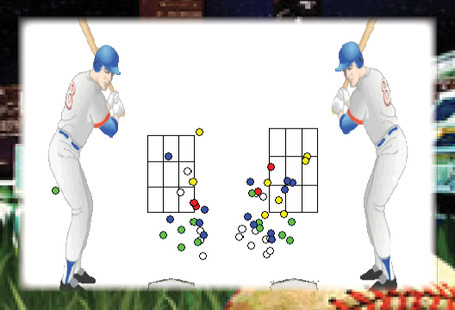 Tonight the Twins continue to try and play spoiler for the Angels, who are running out of time to catch the Rangers in the AL West.