Today's B&B looks at the massive fallout of news after the trade between the Marlins and Blue Jays, including how just about everyone in baseball is angry at Jeff Loria. There's also some FanGraphs articles from 2012, such as Longest Plate Appearance and Home Runs Hit From The Most Inside Pitches, the Mariners getting a VERY big brand new scoreboard, Scott Boras trying to sell Rafael Soriano over Mariano Rivera, and one man's foray into the PED world.

Congratulations to Miguel Cabrera and Buster Posey for winning the MVP awards for their respective leagues. For the NL, I really can't argue over Posey, whom I would say is supplanting Joe Mauer as best catcher in the major leagues even before winning this year's MVP. As for Cabrera, well I was a Trout supporter, but I figured that there was no way the voters could overlook the Triple Crown achievement. I know that Trout is supposed to become a great player, but I just hope that he doesn't suffer a career-altering injury or the like because who knows, this may have been his best chance at winning the MVP. Now, that's a rather pessimistic view, and I'm sure he'll get his due, but you have to admit that this thought enters your mind at least once. Oh, it's just me? Excellent. 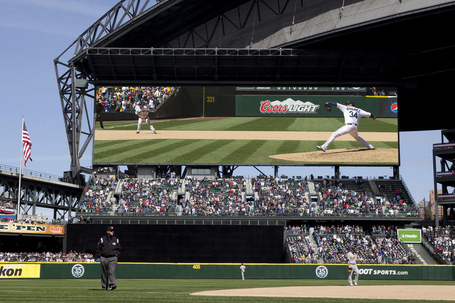 To give you an idea of how large that is, first, it's just a tad smaller than the scoreboards in Cowboy Stadium. It also makes the Twins' scoreboard seem like the Metrodome scoreboards, as this one is going to be 11,425 sq. ft, while the large video board in Target Field is "only" 5,757 sq. ft.

With that comment, I wonder if Boras took over webcomic XKCD for a day.