Our next Designated Columnist, Cliff Corcoran, delves into exactly how Revere's lack of a home run (even of the inside-the-park variety) is placing him in rare company.

To put that in context, among players who came to the plate in the majors in 2012 yet finished the year with a career home run total of zero, the next 22 highest career plate appearances totals all belong to pitchers (led by Ryan Dempster at 688). After Revere, the next non-pitcher on that list is former Twin Tsuyoshi Nishioka, whose major league career appears to have come to an end after just 254 plate appearances. The next non-pitcher who is expected to appear in the majors in 2013 is Brewers shortstop Jean Segura, a rookie in 2012 who has just 166 major league plate appearances. Segura hit 26 home runs in the minor leagues at a rate of one every 67 ½ plate appearances. Revere hit five in the minor leagues at a rate of one every 351 PA.

Yes, you read that right. Ben Revere has hit a home run before. He hit one in A-ball in 2008, two (two!) in High-A in 2009, one in Double-A in 2010, and one in Triple-A in 2011. That’s five home runs in 2,819 professional plate appearances, or one every 563.8 PA. I don’t know if any of those home runs were inside-the-park jobs, but it seems likely. Borrowing a page from Jeff Sullivan, who covered two failed attempts at a major league inside-the-park home run by Revere in 2011, this is Revere’s spray chart for his major league career: 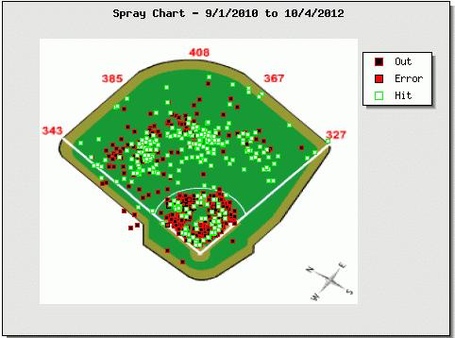 As Sullivan points out, those squares indicate not where a ball landed, but where it was fielded. The furthest-away hits all bounced or rolled to those spots where they were fielded (or, in one case, hopped the fence for a ground-rule double). Ben Revere has not only never hit a home run in the major leagues, he has never flown out to the warning track.

Revere started 79 games in right field for the Twins in 2012 and is currently penciled in as their right fielder for 2013. It is extremely rare, especially in today’s game, for a right fielder to go homerless in a season in which he qualified for the batting title. In fact, prior to Revere in 2012, the last batting qualifier to go homerless while playing more than half of his games in right field was the Astros’ Greg Gross, who did so in both 1975 and 1976. Before Gross, it was the White Sox’s Dave Philley in 1949.

Homerless seasons are a bit more common among left-fielders, and with Josh Willingham providing plenty of power out of left field, it’s perhaps more fair to measure Revere against other corner outfielders, rather than just right fielders. Still, since Gross in 1976, only eight men who have played at least a third of their games at one of the corner outfield positions have gone homerless and qualified for the batting title in the same season, and just two of those seasons have occurred since Luis Polonia did it for the Angels in 1992. In 2005, White Sox’s left fielder Scott Podsednik went homerless in the regular season but hit two home runs in the postseason. In 2007, the Angels Reggie Willits went homerless in a season in which he started 80 games in the corners and 24 in center. Willits, incidentally, has had 1,014 plate appearances in his major league career without a home run, but his last was in May of 2011 and he failed to catch on with a major league organization in 2012.

If the Twins trade Denard Span and move Revere to center, his lack of homers would be only slightly less unusual. Again going back to 1976, only eight players who started more than half of their games in center field have qualified for the batting title and gone homerless in the same season. The Astros Gerald Young, the White Sox’s Lance Johnson, and journeyman Otis Nixon each did it twice, but only two have done it since Nixon in 1995: Juan Pierre with the Dodgers in 2007 and Nyjer Morgan with the Nationals in 2010. Twins fans will be interested in the name of one of the other three: in 1984, his rookie season, Kirby Puckett went 583 plate appearances without a home run. Two years later, he hit 31. If you’re wondering if Revere might experience that sort of power surge, go look at that spray chart again.

Revere’s lack of home runs does not mean he isn’t a useful player. Revere has great speed which makes him an asset both on the bases, where he has stolen 74 bases at an 80 percent success rate in the majors, including 40 at an 82 percent rate in 2012, and in the field, where the Fielding Bible voters ranked him fourth among major league right fielders for the past season. In 2012 he hit .294, which kept his on-base percentage high enough to combine with his baserunning (which is also good for a handful of triples each year) and fielding to make him a solid major league regular worth 2.4 wins above replacement per Baseball-Reference’s wins above replacement. Still, he’d profile better in center than in right, a chance he may yet get if Span is traded, and will still have to keep his average up or improve his walk rate to maintain that value.

A bit further away are the all-time records for the longest homerless streak to start a career. That is owned by second baseman Emil Verban, who broke in with the Cardinals during World War II and went 2,592 plate appearances before hitting his first and only major league home run for the Cubs off Johnny Vander Meer in 1948, a decade after Vander Meer’s consecutive no-hitters. Finally, the longest homerless streak in major league history belongs to infielder Tommy Thevenow, who hit two home runs in late September for the Cardinals in his first full season in 1926, but never homered again over his remaining 12 major league seasons, finishing his career having gone 3,605 plate appearances since his second and final major league home run.

Revere has a long way to go to catch Thevenow, and would probably need until 2014 to catch Verban, by which point one would think he’d have finally completed an inside-the-park home run. However, he has a chance in the coming season to extend his current streak to the longest homerless streak to start a career since Gross went 1,887 plate appearances without a home run to start his career before finally going deep in July of 1977. If he does so, here are the men he’ll pass along the way, with two former Twins next up on the list:

If one thing is clear from the names associated with Revere’s above, he’s not a future All-Star, but that doesn’t mean he can’t carve out a long career as a useful player. However, unless he can either improve his walk rate or display the sort of consistent ability to hit for average that he showed in the minors (where in his career he batted .326), his almost complete lack of power means that the bulk of that career will most likely be spent as a fourth or fifth outfielder.

Cliff Corcoran is one of SBN’s Designated Columnists. His work also appears at SI.com. Follow him at @cliffcorcoran.