Understanding the strengths of his game, it's worth looking into.

Share All sharing options for: Should the Twins Consider Signing Cody Ross?

For all the right reasons, the Twins have spent their off-season to date bringing in starting pitching. Nobody will argue that it's the best direction and the right direction to take. But for just one moment I want to digress from the pitching side and focus on the offense.

In 2012, with a good leadoff batter like Denard Span and a speedster like Ben Revere on the roster, Minnesota scored 701 runs for an average of 4.3 runs per game. While the offense last season wasn't the biggest factor in losing 96 games, scoring 4.3 runs per game was still 11th in the American League. After losing that leadoff hitter and the guy who was so fast he could do somersaults and still get a triple, if the offense, in its current form, is going to get better, then the Twins are stuck hoping for marked improvements from Chris Parmelee, Trevor Plouffe, and Justin Morneau, while hoping for repeats of performances from Josh Willingham, Joe Mauer, and Ryan Doumit. It also means that, in terms of defensive runs, we'd be expecting Parmelee and probably Darin Mastroianni to be as efficient as Span and Revere.

Which brings me to Cody Ross. Why Cody Ross? Walk with me through my reasoning.

This isn't to say that Ross is another Willingham. From 2006 through 2008 they were teammates for the Marlins, and even then Yes Pig was the better hitter. But there are certain numbers that are appealing enough to make signing Ross to a mulit-year deal worth considering.
Willingham and Plouffe were far and away the most prolifically powerful right-handed bats in the lineup last season. After three seasons in Target Field, we understand that if we want power in the lineup, right-handed batters who have the ability to pull the ball over the fence are a valuable commodity. If we look at his home run tracker and layer Target Field over it, we get some pretty clear results. 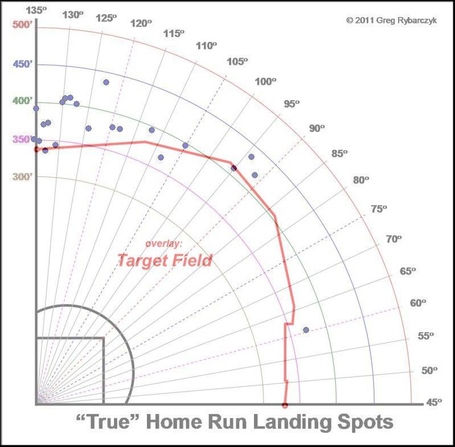 (Image courtesy of Hit Tracker Online)
Whether Ross wants to come to Minnesota is one big issue. Whether the Twins would, or even should, give him what he's looking for (3 years and $21 to $31 million, essentially deals that Willingham and Michael Cuddyer signed last winter), is another. But if the Twins want to seriously consider getting better in 2013, Ross is a player who could, because of his strengths, turn out to be a good player at a decent price.
I wouldn't mind offering Ross a deal between two years and $16 million and three years and $18 million. I'd try to give him a little more money guaranteed per year to see if that might persuade him to take a two-year offer, but I wouldn't mind three years provided it was on a reasonable salary that was movable. If he's hesitant to sign in Minnesota, I'd remind him of our multitude of outfield prospects who are on the cusp and then tell him we'd consider moving him if the team wasn't as good as we anticipate we will be.
I do think there's a fit between Ross and the Twins. Whether that potential exists in real life is beyond me, but I also know that I, like Brandon, still believe opportunities exist for the Minnesota front office to make this team more competitive next summer. Besides, what's not to like about a Mauer-Wililngham-Morneau-Ross-Doumit combo hitting 3 through 7?