Hall of Fame Center Fielders: Where Does Kirby Puckett Fit?

Share All sharing options for: Hall of Fame Center Fielders: Where Does Kirby Puckett Fit?

A number of weeks ago I made a comment on a post, now forgotten, where I wondered aloud whether Kirby Puckett really was a Hall of Fame center fielder. It was a question I'd been mulling over for some time, without ever really checking numbers or knowing how a center fielder would be qualified for the Hall. Naturally, it got me to thinking.

Below is a chart of 17 of the 20 Hall of Famers who are officially listed as center fielders. Unfortunately, the numbers for Negro League center fielders Cool Papa Bell, Turkey Stearns, and Cristobal Torriente aren't yet accounted for at baseball-reference.com, who are still in the process of getting Negro League career statistics loaded. But we do still have 17, and we can work with what we've got.

Where's Puckett? Take a look. We'll go into more detail after the jump. 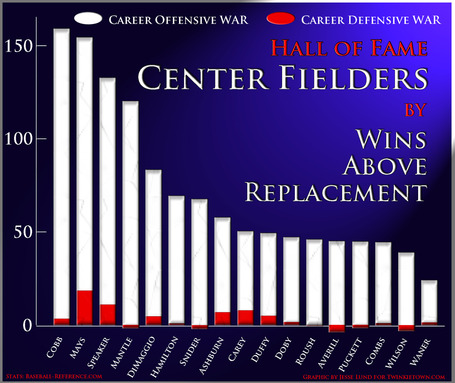 Looking through that list of names, you're getting some of the most iconic names in the history of the game. A couple of all-time great Yankees, plus Cobb and Mays who are head and shoulders above the rest of the competition, and a few of these other guys were teammates, too. Two Hall of Famers in the same outfield? That's not bad.

Puckett, in a vacuum, is outstanding. His career triple slash is .318/.360/.477, and per 162 games averaged 19 home runs and 38 doubles, 99 RBI, 97 runs, and for a guy who packed a bit of punch didn't really strike out too often. Although he wasn't ever really walk happy, either. He led the American League in hits four times, RBI once, batting average once, finished third in Rookie of the Year voting in 1984, garnered MVP votes the next season, and for every year after that for the rest of his career was an All Star.

That's right. For those who don't remember or are too young to know, Puckett made ten consecutive All Star rosters to end his career. On top of that he picked up six silver sluggers, six Gold Gloves, garnered MVP votes nine times and finished in the top seven on seven occasions, including back-to-back third place finishes in '87 and '88, and a second place finish in '92.

And then there are the two championship rings. Puckett hit .309/.361/.536 in the post-season, but is best remembered for his catch against the plexi glass and game-winning home run in game six of the '91 World Series. I don't think championships are a prerequisit for greatness, but they certainly don't hurt someone's case.

All of that is astounding. Puckett was a special player who always seemed to represent the game well while he played. He was a great story, making his way to the Majors from humble beginnings in Chicago. He always had a smile on his face, and had an infectious personality. Baseball loved him. In Minnesota, he was a hero.

In light of all that evidence, it can be difficult to argue against Puckett. But the chart above isn't exactly a ringing endorsement of his accomlishments. Baseball Reference believes his defensive value wasn't as great as those Gold Gloves might imply. And then there are the career totals: 2304 hits, 207 home runs, 1085 RBI. The .837 career OPS is good, but it isn't great.

At the time of Puckett's election into the Hall of Fame, some wondered if he reached that iconic status because of what people believed he would have accomplished had glaucoma not prematurely ended his career. There are two ways to look at this. First, as true: in his final season, 1995, Puckett hit .314/.379/.515 in 137 games. That's not a guy who's a few swings from retirement. Second, as inconsequential: Puckett would have been in his age-36 season in '96, and was too far away from the 3000 hit or 300 home run plateaus to have reached them anytime soon. Certainly Puck could have played until he was 40, but even at his current rate of production wouldn't have reached milestones by that benchmark age.

Below I'll list the data for the graph above. Ultimately, my personal conclusion is that, yes, Puckett does belong in the Hall of Fame. While his cumulative value is at the lower end of the spectrum for center fielders, from his awards and accomplishments throughout his career and his special place in the baseball community, to his post-season heroics and standing among the Minnesota faithful, he's in. For me.

It's all so subjective. That's part of what makes All Star game voting and the Hall of Fame debates so frustrating. Of course, it also makes for something to talk about. And when it comes to sports, talking about it can be just as much fun as watching.