Cruising through southeast Wisconsin, Chicago and northern Illinois today, I figured I wouldn't have the opportunity to listen to the Twins on my road trip back to Boston. I was right. But at 12:45 Bob Uecker came on the radio for the Brewers-Cubs game, and I figured that wouldn't be so bad. 35 minutes of pregame later the first pitch still hadn't been thrown and I was halfway through Chicago, and was forced to listen to WGN. Then I got this text from my dad.

I gave myself a high-five, happy that Mauer had connected. I didn't text him back to keep me updated on the game, because that would be dangerous driving. Later, I received this text.

I now know that he had the score wrong, but the sentiment was there: this was a game I am sad to have missed. Let's talk about it more after the jump.

After picking up their first win of the season on Wednesday in what can only be described as even more exciting because I was there, watching Francisco Liriano stumble his way through a five-run second inning had to be gut wrenching. Mark Trumbo leading off the inning with a homer is not a good thing; nor was the two-run double from Peter Bourjos, the walk, Mauer's throwing error or, really, any particular moment of that frame. And although the Twins doubled their yearly run total by scoring six on Wednesday, I'm sure that pressing the offense for a big number on Thursday still wasn't high on anyone's priority list.

Yet the Twins responded, and responded with the power of a planet-buster. Joe Mauer homered. Josh Willingham homered...again. And even better: Justin Morneau homered.

Oh my did he homer.

Mauer turned on an inside cut fastball and launched it deep into right field. Willingham's fourth bomb of the season wasn't such a no-doubter, but it still hit the seats in the left field home run porch. But Morneau's blast? You can see it here.

The reaction on the face of Angels reliever Rich Thompson is part of the fun. 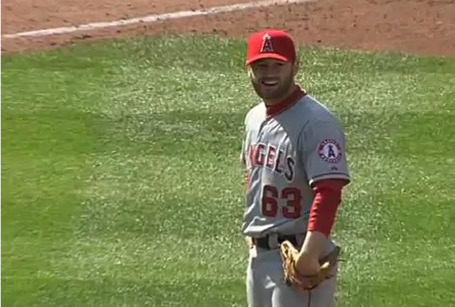 Alex Burnett held serve for two solid innings of relief, throwing a scoreless sixth and seventh as he struck out three and allowed just one hit. The rest of the stars were on the offensive side of the ball.

Mauer's homer cut the Angels' lead in half, to 6-3. Willingham's homer was solo, to pull the Twins within two. Morneau's homer was a go-ahead, two-run blast that made it 8-7 (pretty close, Dad). Denard Span and Danny Valencia also drove in runs, and Luke Hughes drove in a pair off a sac fly and a single. Span, Jamey Carroll, Mauer, Willingham, Chris Parmelee, and Valencia all reached base at least twice.

The pitching wasn't where the Twins would like to to be, but that's how sports work. What was important about today was that the offense showed some teeth and that, ultimately, that meant a win. After getting swept by Baltimore, taking two of three from a team like the Angels is a big, big step in the right direction.