The Twins started the season 0-4, and we can see that quite a few people jumped off the preseason bandwagon immediately. 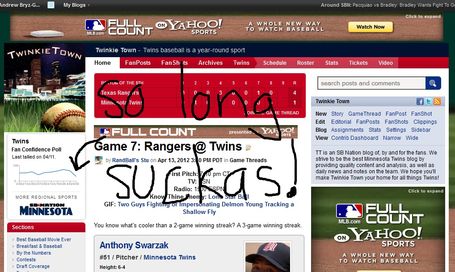 This after 2.5% of the season. Wanna know what equals 2.5% of an NFL season? Getting past the halfway mark of the 2nd quarter of your team's first game, but that's okay. Your lack of faith means more leg room for me in the stands come August.

For those of you that remember, I work at Target Field as an usher during the season. Today is my first game I'll be working this season. If you happen to be at the game, I can be found in Section 238 below the smaller scoreboard in right field. Let's see the Twins give Yu a rude welcome to Minnesota.