Breaking Down Carl Pavano's Start Against the Yankees

Share All sharing options for: Breaking Down Carl Pavano's Start Against the Yankees

If you were lucky enough to catch last night's win in New York, what you saw from Carl Pavano was a work of art. He didn't break 90mph on his fastball the entire night, yet he was able to mystify Yankee hitters by making them believe they could hit pitches that they couldn't. Particularly over his final five innings of work, Pavano's sinking fastballs and changeups did everything he could have possibly wanted them to and went exactly where he wanted them to.

We'll talk numbers after the jump, but think about this: Pavano threw four breaking balls all night. Four sliders. One in the second, one in the third, one in the fifth, and one in the sixth. Everything else was either a changeup, sinker, splitter, or fastball (according to Gameday's pitch classification).

Since 2009, Carl Pavano has been one of the best pitchers in baseball at getting batters to take swings at pitches outside of the strike zone. Only Hiroki Kuroda (34.5%) has posted a higher percentage than Pavano (34.4%) in that period. And when pitchers of this ilk get umpires who are willing to call strikes on close pitches that have been swung on by batters thoughout the game, aka "expanding the zone", they can be deadly.

More on Pavano's performance after the jump.

As last night's contest wore on Yankee fans on Twitter started to make a few snide remarks about Gerry Davis' strike zone. It was hard to blame them, some of the pitches were definitely off the plate. Of course, the Yankee hitters did it to themselves. They swung on missed at seven (7!) of Pavano's changeups, many of which ended up dying out of the zone, and they'd been swinging all night at sinkers and splitters off the plate.

Brooks Baseball has a "standardized" strike zone plot, which essentially shows how an umpire set up his strike zone in a given game. Here is the strikezone that Davis set up for both right and left-handed hitters.

It looks like Davis was spot on going vertical, but horizontally he gave both sides of the black to the pitcher against righties and really gave a two or three inches outside against lefties. You can see the Yankee squares and Twins triangles - it's not as though he was being unfair to either side.

What Pavano was able to do with this, though, was to turn those borderline pitches into strikes not just because they were called (and a couple of them were), but because the hitters swung at those pitches. As a result, Pavano induced an overwhelming number of ground balls - particularly once he got out of that first inning.

This is Pavano's result pitch location, from the second inning through the seventh.

Twelve of those twenty-one result pitches were borderline or clearly off the plate, and none of them can be blamed on the umpire. Pavano did enough to throw off the timing of the opposition, picked up a lot of weak contact (nine ground balls outs, plus a single on the ground).

Joe Girardi loaded his lineup with hitters who could stand on the left side of the box, playing conventional baseball wisdom not to mention the .290/.340/.451 triple slash that lefties have put up on Pavano in his career. But last night they were just 3-for-17, all three hits off the fastball. With his solid command of his off-speed pitches last night, Pavano stayed away from lefties and it worked. Here's his full pitch plot versus lefties courtesy of My Inside Edge. 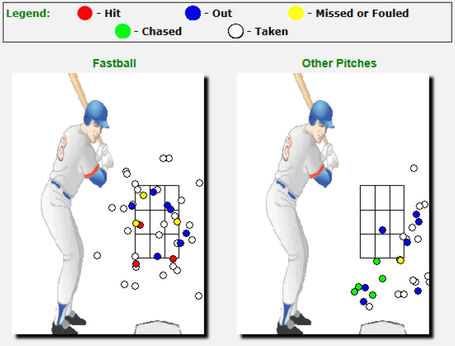 This is just another way of showing that a lot of Pavano's success came from his off-speed pitches, and it tells the tale we're all well aware of: if Pavano hits his spots, and if the batters take the bait, he could have a fantastic game.

What if the Yankees hadn't swung at pitches just off the plate early in the game? Would the strike zone not have expanded, forcing Pavano to come back into the zone where his stuff means he's more likely to get pounded? Maybe the big first inning put the Bombers in the mindset of being able to hit whatever they were thrown, and that helped set Pavano up for success the rest of the game.

I make those points because it's not as though Pavano was perfect last night. He didn't throw a lot of first pitch strikes (just 46% of batters). When he did leave his off-speed stuff over the plate, the Yankees hit those pitches hard. New York did smash a few balls that were outs - line drives as well as ground balls.

The bottom line for me is that the Twins won, and they deserved to. Pavano deserves all the credit he gets for making Yankee hitters look foolish. But the Minnesota defense also deserves a lot of credit (Alexi Casilla's incredible diving stop and flip to Jamey Carroll springs to mind immediately), and the New York offense played themselves right into Pavano's hands.

If you want to see exactly how Pavano and pitchers like him can dominate a baseball game, last night's victory is a textbook example. He played his game, and he was great as a result.