You know how fans always argue that players should play through the pain, even when the injury affects something VERY critical to that person's success? You know, how people were angry that Joe Mauer couldn't play through his "bilateral leg weakness," even though your legs are collectively one of the most important things you need to hit and especially crouch as a catcher? Well, I got a taste of attempting to "play through the pain" while teaching. If I had a head cold, it wouldn't be pleasant, but I'd survive.

However, I lost one of the most valuable things a teacher needs: My voice. I tried to tough it out on Wednesday, and I couldn't raise my voice at all. Thursday, I made it through one and a half classes before going home. Friday was identical to Wednesday. If I was a hitter, I would have just gone 1 for 18 in a week, along with riding the pine for 2-3 games. Thankfully, the kids showed some mercy on me and were slightly easier to quiet down these past few days.

Enough about me. Here's your baseball news.

* Which makes me question why you're reading this Breakfast & Baseball post in the first place. 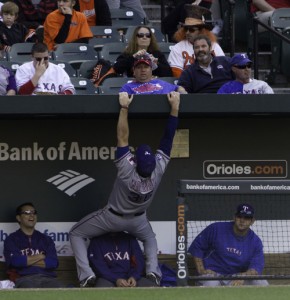 Come back later for the game thread. I'll try not to forget it this week.