Twins 4, Royals 2: Nick Blackburn's Return to the Rotation a Success

Share All sharing options for: Twins 4, Royals 2: Nick Blackburn's Return to the Rotation a Success

I feel like these recaps are becoming a trend for me: struggling pitcher put in bullpen/Rochester, returns to the major league team, throws well enough to earn a win. Wash, rinse, repeat. Tonight, it was Nick Blackburn who returned to the Twins starting rotation, throwing 5 innings of two-run ball. In his first start since May 16th, and after a couple rehab starts in Rochester, Blackburn wasn't super sharp tonight, giving up 5 hits, 2 runs, and a home run in the five innings he pitched, but he only allowed the two runs and it was good enough to earn him a win. He threw 92 pitches in just the five innings, which in the future, could be bad news. Tonight, however, it sealed the Twins a series win, giving them a 7-3 record in their last ten games.

Blackburn got off to a rocky start, allowing an Alex Gordon single, quickly followed by a Yuniesky Betancourt home run to left field. With the Twins down 2-1 already in the first, things were not looking good for Blackburn's return. He did manage to settle down, however, and aside from the walks, was mostly able to keep the Royals off the base paths.

The Twins offense did just enough to get the win tonight, bolstered by Justin Morneau's game-winning two-run hit in the fifth inning. Morneau is now hitting .237 on the year, and continues to slowly get his average back up. Other Twins that contributed offensively: Ryan Doumit, whose RBI double in the first scored the Twins their first run, Jamey Carroll, whose seventh-inning RBI single drove in Ben Revere who had just hit a triple off of Kelvin Herrera, and Ben Revere, who managed a couple of hits tonight, including the aforementioned triple.

Minnesota's bullpen held the game in check very nicely, with Jeff Manship, Jared Burton, Glen Perkins, and Matt Capps all combining to pitch a scoreless 4 innings. Collectively, they only gave up two hits, no walks, and struck out 5 batters (3 of which were Jared Burton strikeouts. Yeah.). Matt Capps came in in the bottom of the ninth, induced two groundouts and struck Brayan Pena out to end the game. Another solid relief/closer appearance for Capps, thankfully.

It is important to note that after recording just two outs, Kansas City's starter, Felipe Paulino, was taken out due to a strained left groin muscle. Hopefully he's not injured too badly, as he's had a really good start to the year. Opponent or not, injuries are never a good thing.

Studs--In no particular order
1) Justin Morneau. Game-winning hits will earn you a stud note.
2) Nick Blackburn. Good enough to earn yourself a win, Mr. Blackburn.
3) The bullpen, especially Jared Burton. Excellent work from the 'pen when they were really needed.

Duds
1) Trevor Plouffe, Brian Dozier, Alexi Casilla. All combined for a whopping 0-for-11. Ouch.
2) The LOB numbers. The Twins left 14 men on base tonight. That's really bad. Plouffe, Doumit, and Morneau combined for 10 of those men LOB.
3) Whoever stitches the jerseys. Jeff Manship's jersey had a little mistake tonight... 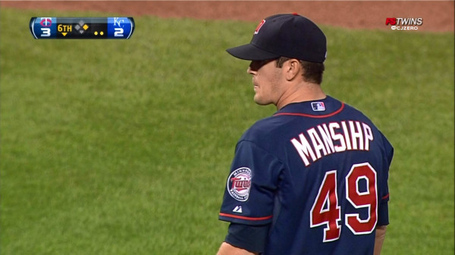