Share All sharing options for: This Week in Twins History: Johan's Amazing Game, the Beatles Visit Minnesota, and Dean Chance Throws a No-no

Let's jump right into this, shall we?

August 19, 2007 - Twins pitcher Johan Santana strikes out a team-record 17 Texas Rangers in 8 innings in a 1-0 win at the Dome. Michael Young struck out all four times at the plate, and Sammy Sosa was the only Texas player to actually get two hits against Minnesota. This video shows his 17th K of the day...and the crowd goes wild.

August 21, 1965 - The Beatles play a concert at Metropolitan Stadium in Bloomington. 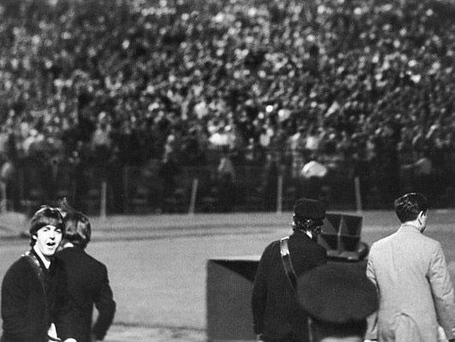 More Twins moments after the jump!

August 23, 1966 - The Twins hit a milestone, winning their franchise 500th game, with a Jim Kaat win. The Twins won 7-0 and Harmon Killebrew went 2-for-5 with 2 RBI. The team defeated the Washington Senators and the losing pitcher was Pete Richert.

August 25, 1967 - Twins pitcher Dean Chance pitches the second no-hitter in the team's history. The Twins beat the Indians 2-1 in what was the second game of a double-header. Chance actually allowed a run to score, due to a wild pitch, error, and walk, in what is clearly the most Twins Baseball (TM) win of all time.

August 25, 2008 - The Twins re-acquire Eddie Guardado from the Texas Rangers. The team sens Mark Hamburger to the Rangers in return for the services of Everyday Eddie. I leave you with this video.