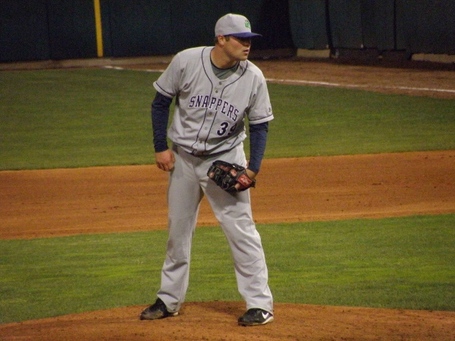 As voted by the good people of Twinkie Town, Tom Stuifbergen was this week's minor league player of the week. While Stuifbergen has had his fair share of issues throughout his career with Minnesota, Stuifbergen had a great performance against Bradenton this week, going all nine innings and giving up just two runs. He gave up six hits, walked none, and struck out three. Unfortunately for Stuifbergen, the two runs allowed were unearned, and he notched another loss in what's been a difficult year for the 23-year-old.
More about the Twins' minor leaguer after the jump.
By any standards, Stuifbergen's numbers aren't flashy, especially considering his age. He's on his 4th year of MiLB service time, and only still on the Twins GCL team. This week's spotlight isn't about his past, though, and instead, will be focusing on his most recent performance with the Twins minor league team.
Stuifbergen's complete game campaign may have gone better (read: ended in a win) if not for his error-riddled sixth inning on August 22nd. After getting two quick outs via popout and lineout, Stuifbergen then allowed a single and double. Thanks to a throwing error (from himself...), one of the runners scored, and after another error by third baseman Anderson Hidalgo, the score was 2-0 and the Miracle would not score another run to tie the game, let alone win it.
While Stuifbergen has a ways to go before he could see Minnesota (if...if he ever does), it can be said that he throws hard and is usually able to induce a lot of groundouts. Unfortunately, he's had injuries holding him back, as well as well...not always being at the top of his game. This week, though, a complete game effort, even if it ended in a loss, was enough to score Tom a Minor League Player of the Week nod. Hopefully we'll see a lot more success from this young man in the coming years.