I guarantee that coming into this season, no one thought that Cole De Vries (3.98 ERA), Sam Deduno (2.48 ERA), and Scott Diamond (2.93 ERA) would be the Twins' three best starting pitchers. While their respective FIPs suggest that all three are pitching over their heads (De Vries gives up too many homers, Deduno walks too many, and Diamond doesn't strike out enough batters), their sub-4 ERAs have been very nice to see, especially after suffering through Jason Marquis' 8.47 ERA over 7 starts earlier this season.

To the tidbits around MLB!

"When the time is right, I’ll be honest with you, you’ll be right in the loop. I’ve been shown a lot of things over the past week. There’s disobedience and there’s obedience to God. I’ve been being disobedient. It may be a small thing to you, but it’s a big thing to him. There’s consequences. It’s like a father and a kid. There are disciplines. You guys can chew on that and think about it."

... which naturally has fueled speculation as to what is going on with Hamilton. Some have said that his marriage is falling apart, others have suggested that he's had another alcohol or drug relapse, and I've even seen one comment that guesses that Hamilton is actually gay. All we can really do is wait for Hamilton to come out (sorry, pun not intended there) and reveal what he's been hinting at here.

On a lighter note, how many other religious players are going to start using God's punishment as an excuse for their slumps now?

Edit: It turns out that Hamilton's issue is.... discipline. What?

"The issue is 'discipline.' Professionally, it’s been plate discipline. Personally, it’s been being obedient to the Lord in quitting chewing tobacco. I was hesitant to address the tobacco once again, because it’s an area that I’ve struggled with trying to quit in the past."

More specifically, Hamilton's been struggling with quitting his chewing tobacco, which really isn't as big of a deal to me as Hamilton had been letting on. However, it's certainly a big deal to himself, and his struggles have likely carried over onto the baseball field, leading to his recent slump at the plate. Good luck to Josh as he continues fighting yet another addiction in his life. 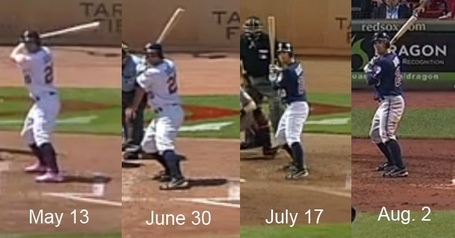 * Yes, I totally was thinking of the Beastie Boys "I've got more hits than Sadaharu Oh" lyric from "Hey Ladies" when I typed this.

I will admit that it looks very similar to Stance #2, but the slight difference is that he's now resting the bat on or just above his shoulder, whereas in #2, he was holding the bat just a little higher.

The Twins have Game 3 against the Red Sox later today. Will Josh Willingham smash a home run into the parking lot beyond the Green Monster? Tune in to find out!