After last night's spectacular come from ahead defeat, the Twins dropped to 59-84 on the season. Looking forward there are certainly some things to look forward to. Kyle Gibson, Miguel Sano, Aaron Hicks, Eddie Rosario, Oswaldo Arcia, Max Kepler, Byron Buxton, Jose Berrios, Mason Melotakis, and Travis Harrison are ten bright spots. I feel like ten is a good, round number.

Next June isn't predicted to be a draft deep on talent at the top end. A few people have said it's actually even more shallow than this year, which is kind of a turn off because if you're going to cheer for a bad team you'd like to at least think that there's that high draft pick to look forward to.

But then again, with the exception of a rare few, it's impossible to predict which players will have sustained, long-term success anyway.

At present the Twins are slated to select fourth overall in next June's draft. Ahead of them in the 2013 order are the Astros, Cubs, and Rockies; the Twins have the tie breaker over the Indians because Minnesota had the worse record last season.

There's some wiggle room yet. I'd guess the Twins could still end up drafting anywhere between second and sixth. Here's how things stand in the top ten as of today. 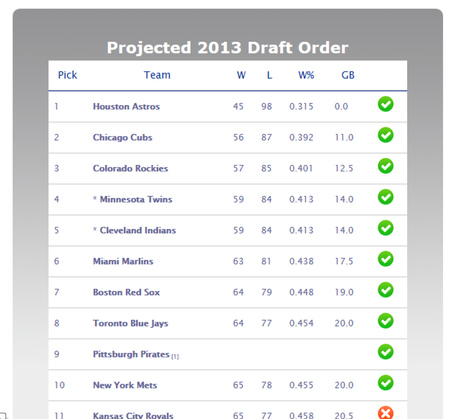