The Value of the "Extra Foot" on a Fastball

Share All sharing options for: The Value of the "Extra Foot" on a Fastball

For years, the Twins drafting, scouting and free agency strategy has focused on relatively soft throwers like Kevin Slowey, Nick Blackburn and Carl Pavano. However, over the last couple of seasons, the Twins management has apparently made an effort to acquire more "power" arms, both for the starting rotation and in the bullpen. While we can debate the value of acquiring power arms at the typical expense of command of the strike zone, how much do we really understand the value of additional speed? What's the real difference in pitcher/batter performance between a league average 91 MPH fastball and a 97 MPH heater?

First, let's look at reaction time. In general, Major League pitchers release the ball roughly 55 feet from home plate, which means a league average 91 MPH fastball will take just a shade over 0.4 seconds to reach home plate. This may not seem like very long, but over the same time a 97 MPH fastball will travel an additional three and a half feet, or roughly the difference between being in the catcher's mitt versus the middle of the hitting zone. So one would expect a batter to swing and miss more often as fastball speed increases. After the jump, I'll go into more detail explaining how fastball speed correlates to batter "whiff" rates, ground balls versus fly balls, home run rates, slugging percentage and batting average on balls in play.

First, a few notes to describe how this analysis was performed. I grouped all fastballs (using Pitch F/x classifications) into bins of 1 MPH each (e.g., 92.0 - 93.0), and added duplicate bins (e.g., 91.5 - 92.5 and 92.5 - 93.5) in order to smooth the data. Unlike other analyses, including Dan Turkenkopf's 2009 study of Pitch Speed and Balls in Play, I did not group data by pitcher, calculating average pitch speed over a pitcher's entire repertoire, as this method can introduce bias associated with pitch movement and quality of off-speed pitches, which could affect a batter's performance. I chose to simply group fastballs by their speed, regardless of who threw the pitch, how much it moves, day or night, etc. This produces a much larger data set, with over 1,000 batted balls in each 1-MPH "bin". I also chose to group all of the extreme cases into single bins, all pitches below 85 and above 96 MPH in order to ensure significant sample sizes across all bins. 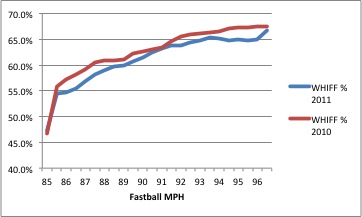 As one would expect, batter "whiff" rate, or the percentage of times a batter fails to put the ball in play when he swings at a fastball, increases steadily as speed increases. The relationship is roughly linear, approximately an additional 1% increase in whiff rate with each additional MPH. And the curves appear to be similar between 2010 and 2011, with the exception that whiff rate appeared to plateau around 93-96 MPH in 2011, then climb sharply beyond 96 MPH. It will take some investigation to determine why this plateau exists, but the relationship appears to be clear. Increased fastball speed reduces contact rate, whether we're comparing 86 MPH to 91 MPH or 91 MPH to 96+ MPH. 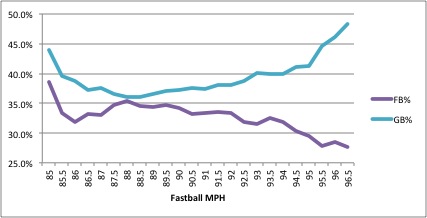 It also appears that as fastball speed increases, pitchers induce far more ground balls and fewer fly balls. After nearly converging around 88 MPH, the graphs diverge quickly, resulting in over a 20% gap for elite fastballs over 96 MPH. Considering that it's impossible for ground balls to result in home runs (other than in-the-park), we would expect to see corresponding reductions in home run rates. 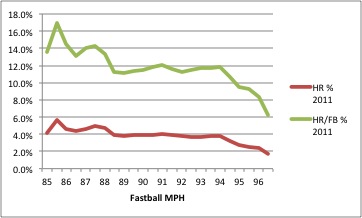 As expected, there is a clear relationship between home run rates and fastball speed. Given the reduction in fly ball rates noted above, one expects a reduction in home run rate. But even though fly ball rates decrease by over 2% comparing 88 MPH to 94 MPH, home run rates remain pretty constant around 4% across these speeds. Most important, there clearly appears to be a "knee" in the curves around 94 MPH, where not only home run rates, but also home runs per fly ball decrease by around half. It will take some further investigation to see if this is consistent from year to year, but the data shows that if one wanted to limit home runs in 2011, having a fastball over 94 MPH had a large impact. 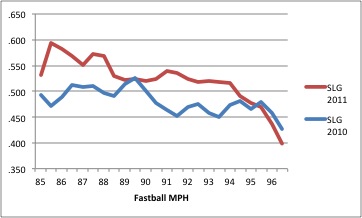 Given the fly ball and home run rate decreases shown above, it's not surprising that slugging percentage decreases against elite fastballs. The correlation is greater in 2011 (0.88) than in 2010 (0.66), but it's present. In 2011, an elite fastball shaved nearly 150 points off a batter's slugging percentage compared to a league average 91 MPH. In 2010, the reduction was much smaller, closer to 50 points, but there appears to be a lot of noise in the data that should be investigated. 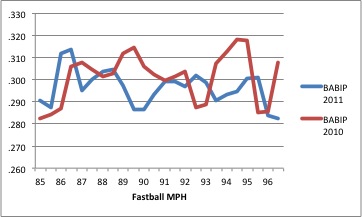 Previous studies have shown a relationship between BABIP and pitch speed, but based on my 2010 and 2011 data there does not appear to be a correlation. I suspect this may be due to other studies looking at pitchers and their average speeds as opposed to just the pitches regardless of who throws them. Given the impact that pitch speed makes on ground ball versus fly ball rates, I would have expected a slight increase in BABIP since ground balls are more likely to become base hits than fly balls, but this relationship does not appear to exist. And I don't think line drives (the single largest contributor to BABIP) play a factor here, as I found very little correlation between line drive rates and fastball speed in 2010 and 2011.

As expected, there is a clear relationship between fastball speed and GB/FB and home run rates as well as slugging percentage. And the impact appears to be greatest when a fastball is thrown at 94 MPH or greater. Given this relationship, it likely explains Glen Perkins' improved performance in 2010 and 2011 throwing out of the bullpen, where he has posted average fastball speeds of 94.0 and 94.9 MPH (according to fangraphs) compared to the starting rotation (89-92 MPH in previous seasons). However, before one can make a conclusion regarding scouting and drafting strategy, one should investigate the impacts of a pitcher's ability to throw strikes and command the strike zone at higher speeds.