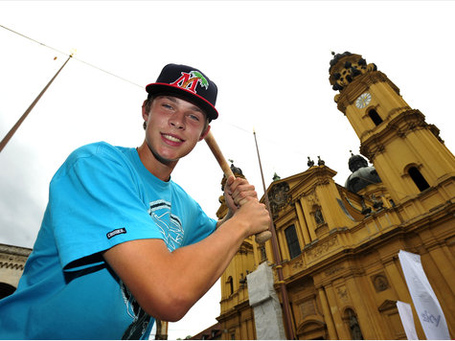 In the bottom of the third inning, with the score tied 1-1, Max Kepler homers off of Princeton pitcher Jorge Rodriguez to put the Twins up 2-1. It would be Kepler's 10th homer of the year, and would give the Twins a lead they would relinquish and eventually earn back. Later, in the bottom of the 8th inning, Kepler singled to score Jorge Polanco, and after Byron Buxton stole home later in the inning, Kepler went on to steal second. The Twins eventually ended up winning the game 6-4.

The game started with a bang for Max Kepler, as he homered in the bottom of the first, off of pitcher Mauricio Cabrera. It was Kepler's 11th home run this year, but first of the playoff games. In the bottom of the fifth, with the Twins leading 2-0, Kepler walked to load the bases for D.J. Hicks, who unfortunately grounded into a fielder's choice, ending the inning. After Danville's 7-run fourth inning, the Twins were unable to come back to tie and/or win the game, and Kepler's fly out to right field was actually the last out of the game.

The Twins ended up beating the Princeton Rays on September 3, 10-6 in 12 innings, to win the Appy League championship title this year. In what can definitely be described as a storybook moment, D.J. Hicks hit a game-winning grand slam in the bottom of the 12th inning to give the Elizabethton Twins the title.

Max Kepler will probably (hopefully) play a bigger part in the Twins future, but for now, he'll continue to grow and fine tune his skills in the minors so he can become a more productive player for the Minnesota organization.