Today's B&B recaps some of my adventures at TwinsFest last night, Delmon Young's weight incentive clauses in his new contract, the New York Mets refusing to give up their 1st round pick to sign Michael Bourn, Cuban defector Aledmys Diaz possibly claiming to be older than he really is, and A.J. Burnett being a little rusty this offseason.

Ladies and gentlemen, TwinsFest is upon us! I was volunteering last night at the Metrodome, and I was able to chat a bit with Drew Butera, Casey Fien, and Liam Hendriks towards the end of the night as the lines died down. First, I learned that Drew is a very funny guy, as evidenced by this picture of him taunting Trevor Plouffe with a cutout of Plouffe. 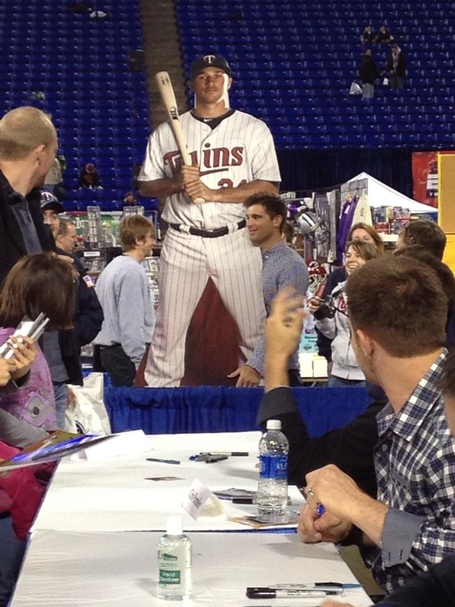 I also embarrassed myself with Casey Fien when I told him that he looks like my girlfriend's brother, except with "less of a receding hairline," which Liam Hendriks thought was absolutely hilarious. I quickly apologized and told Fien that I probably could have chose a better line, but I quickly clammed up after that and stood awkwardly next to Fien for the last 15 min. of the autograph session.

Finally, a fellow usher nearly asked Butera to "instruct me how to Douglas." I think she should have followed through with that request.

Those were still better throws than what we see in this commercial, however.