On This Date In Twins Playoff History: October 1

While ten teams around the league get ready for October baseball, the Twins are, of course, stuck at home. But here is what happened throughout the franchise's history on this date.

Share All sharing options for: On This Date In Twins Playoff History: October 1

For the first time in eleven years, the Minnesota Twins made the playoffs by posting a 94-67 record on their way to the first of six AL Central titles in nine years. October 1 was Game One of the American League Division Series, with 29-year old Radke facing off against one of the Athletics' triumvirate of young starters, 26-year old Hudson.

Oakland jumped out to a quick and early lead, with Chavez and Justice delivering run-scoring singles in the bottom of the first to give the A's a 3-0 lead. Hunter and Cuddyer's doubles put the Twins on the board in the top of the second, but the A's were back at it again in the bottom half of the frame when Hatteberg and Chavez (again) each singled to give the home team a 5-1 lead after two. It didn't look good for the Twins, with Radke off his game, but the game grew close once again in the top of the third when Corey Koskie took Hudson deep for a two-run homer.

After that the game settled in for a couple of innings, both teams trading zeroes before Mientkiewicz led off the sixth with a solo homer. With Hudson chased, Ted Lilly took over but allowed the first four Twins to reach base safely before recording his first out. When the dust settled, the Twins had taken the lead on the back of a three-run inning. Pierzynski tripled in the seventh to plate Cuddyer from first, pushing the game to 7-5 and the final score. Johan Santana, J.C. Romero, and Eddie Guardado combined for four scoreless innings in a fantastic effort. 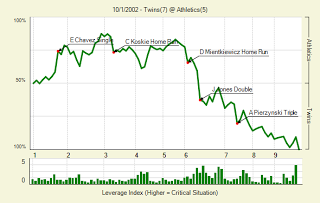 The 2006 campaign goes down in history as one of the most fantastic and entertaining regular seasons in franchise history. Justin Morneau and Torii Hunter gave the team a 30-home run hitter for the first time in 29 years; 23-year old Joe Mauer became the first American League catcher to win a batting title; 25-year old Morneau took home the MVP; 27-year old Johan Santana won his second and final Cy Young award; 22-year old Francisco Liriano was electric before blowing out his elbow.

But what really set the season apart was how Minnesota won the division. Mired in fourth place for most of the first half of the season, the Twins started winning and took over second place for good on September 4. With four games to go Minnesota drew even with the Detroit Tigers for the division lead with both teams matching results so that, entering the final day of the season, nothing had been decided. The Twins beat the White Sox 5-1, but Detroit was still in battle with the Royals - and nobody left the Metrodome. Everyone stayed, and watched a 100-loss Kansas City squad take down Detroit in 12 innings. Everyone say "thank you" to Esteban German and Kenny Rogers.

Minnesota's win and Detroit's loss gave the Twins the division lead for the first time all season - a feat never achieved prior in the history of Major League Baseball - and launched the squad into the playoffs.

Other Events On This Date

On This Date In Twins Playoff History