Where Do the Twins Need the Most Help?

Starting pitching, obviously. But what other areas will require the attention of the front office?

Share All sharing options for: Where Do the Twins Need the Most Help?

Comments: This is the easy one. We know the Twins are targeting starting pitching, and whether they choose to get it through free agency or trade, one thing is certain: the internal candidates are weak. Correia and Gibson are the only two with their spots locked in. Diamond and Worley figure to be given opportunities at some point during 2014, and as long as Deduno is healthy he pitched well enough to be in consideration as well. But a rotation made up of any five of these seven pitchers would be among baseball's worst.

In the minors, the closest pitchers with talent to be more than a number five are Alex Meyer and Trevor May. With good and healthy seasons both could push for an appearance with the Twins at some point in 2014, but they won't be ready to help the team out of spring training.

Comments: Even Gardenhire won't carry nine relievers. He has the option of retaining what is essentially the same bullpen as 2013, minus Josh Roenicke, which is already an upgrade. If the Twins tender Duensing, two of the above pitchers will need to be optioned to Rochester, with the most likely candidates being two of Thielbar, Tonkin, and Welker.

Complicating the issue will be the fact that the Twins could add additional pitchers to the 40-man roster who could challenge for a role on the big league club out of spring training, including A.J. Achter and Lester Oliveros. Of all the spots on the roster to be filled, the bullpen has a relative embarrassment of riches.

Comments: As fun as it would be to see the Twins bring back A.J. Pierzynski, the only way the front office will focus on bringing in a catcher is if they believe both Mauer and Doumit won't be doing much catching in 2014. In that scenario it's likely they would try to bring in veteran to timeshare with Pinto, provided Pinto proves he's ready to perform against Major League pitching over a full season.

As it stands, the Twins have five catchers on the 40-man roster; two of those catchers are MLB veterans, one is a rookie, and two appear to be stop-gap options who, ideally, wouldn't be getting more than half a dozen starts in a year. With a caveat that things could look differently down the line, until the status quo officially changes I don't think there's going to be much focus on catching.

Comments: None of these options are ideal. Parmelee nor Colabello have hit Major League pitching in their short careers, and while improvement is always possible it didn't look like much of it was happening this past season. It's also not ideal if Mauer moves to first base, because it would mean his post-concussion issues aren't passing as well as we hoped they would. As far as offensive talent goes Mauer would hold his own at first base, but it isn't about that.

Another option would be to move Willingham to first base, but there hasn't been any kind of acknowledgement of that possibility from the Twins. There's also no immediate help for first base in the minor leagues. 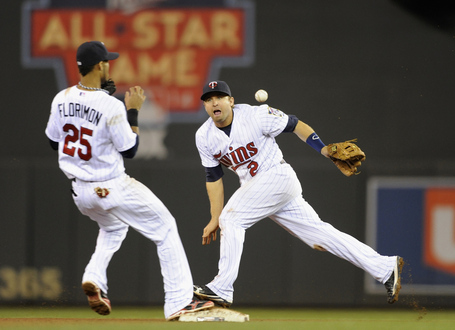 Comments: As one of the few spots that don't need to be worried about this winter, the concept of trading Dozier has come up and it's an intriguing thought since it would mean trading him at what is possibly the height of his value. Obviously that development would change everything, and it also seems highly unlikely at this point - not just because it's not necessary, but because trading him would create yet another hole on a team with far too many already.

Part of what prohibits the Trading Dozier scenario is that Eddie Rosario, who had been converted to second base for the last year and change, won't be MLB-ready in 2014. We don't even know for sure if he's going to stay at second base or if he'll be moved back to the outfield. Additionally, other potential middle infielders such as Danny Santana, Jorge Polanco, Niko Goodrum, and Levi Michael are nowhere near the points in their development where asking them to handle any kind of time in the Majors is going to happen.

Comments: Plouffe's raw power, in addition to his relatively low cost-to-production ratio, make him the best option for third base on the 40-man roster. What makes his job safe over the winter, however, is the looming presence of Miguel Sano. While Sano won't be ready to go north with the Twins in spring training, he could make an appearance with the big league club at some point in 2014, and the front office won't do anything to block him. Finding a player to start at third base for just one season would be almost impossible to do for a losing team anyway.

One player who could step in earlier in the season is Deibinson Romero, if he earns the opportunity. It would be interesting to see what he can show, but he's certainly not going to take third base away from anyone.

Comments: Florimon's defensive prowess and penchant for coming through with a timely hit means his job is also relatively safe. The same issues that keep us from seriously discussing a scenario where we trade Dozier - nobody better to play the position this season but minor league help at least a year away - give Florimon a bit of security as well. On a team where players who have some kind of positive contribution are in short supply, sometimes that's enough.

To be fair, if the Twins boasted even a league-average offense, Florimon's lack of a bat wouldn't be an issue as a shortstop.

Comments: This is one area where the Twins have a great deal of depth available, but not much of it ideal for a team that isn't terrible. Willingham's defensive abilities, such as they were (or weren't), aren't going to get any better after an injury-plagued season and in a season where he'll be 35. Doumit, Colabello, and Parmelee are all part-time corner outfielders, at best. Arcia's bat has middle-of-the-order potential but his defense needs more work. Finally there's Maestro and Presley, who can play any outfield position but don't really have any offense of which to speak.

While it involves a number of "what-if" scenarios, I can see a situation where one of these players is non-tendered or optioned to Rochester and also where the Twins try Willingham at first base in order to make the defense in the outfield better. I think that if an opportunity arose to acquire an outfielder who could play in the corners and could hit, the front office would still jump at that opportunity in spite of his apparent log jam.

Comments: As much as we'd all like to see Hicks succeed, based on his season at Triple-A in 2013 it doesn't look like he'll have the same opportunity to break camp with the starting center field job for the Twins in 2014. That honor will fall to either Maestro or Presley or, quite feasibly, both...depending on whichever player happens to be hitting better (or at all) at the time.

I expect Byron Buxton to get a look in during spring training, but like Sano he won't be ready for opening day. A great season might mean a cup of coffee in September, but it's far more likely we'll need to wait until 2015 to see him in a Twins uniform. One thing his presence does do, however, is keep the Twins from signing a center fielder long-term. There is room for a one-year stopgap, or for another player who is capable of sliding across multiple outfield spots, but it's not an issue near the top of the list. 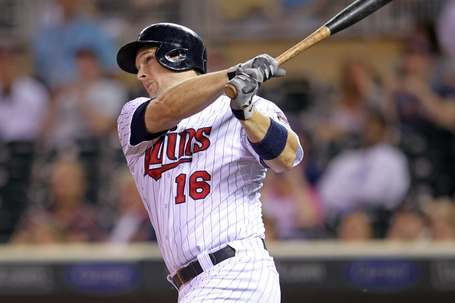 Comments: This is one luxury the Twins won't need to worry about in 2014. For a team that won't be contending, adding a player whose sole job is to hit isn't a necessary function. Instead the Twins will focus on giving DH at-bats to players who need breaks, players who are healthy enough to hit but not play the field, and finally - players who are capable of hitting but aren't necessarily the best defenders. As such, in the current climate I expect many of the DH starts to go to Willingham and Doumit.

Comments: It's easy to imagine a timeline where Ron Gardenhire's 2014 bench is comprised of four of these players. One of Maestro and Presley could be in center, Doumit or Pinto could be the designated hitter, and Parmelee or Colabello could be the first baseman - so it's not as though we're picking four of these players and throwing the rest out. No, at least two of them will have a starting job, and it's easy to count through players and positions in your head and wind up with Herrmann being the one guy who doesn't get a roster spot. At least, that's how it ended up for me.

The reality of the situation is that if the front office wants this team to get better, they're going to need to give Gardenhire more talent. That starts with the rotation, and we can look at positions like first base and the outfield where the players in a starting capacity could easily be improved upon, but that also trickles down into who Gardy can call upon from his bench. Gardy likes to use a seven-man bullpen, so he's forced to carry a four-man bench. While that limits how specialized each player can be, it doesn't stop the team from adding talent.

Of course starting pitching is the primary concern for the Twins, but I've also identified two other areas that should be of the highest concern: first base, and the bench. Secondary focuses such as the outfield could also be addressed, but the parameters for the type of player needed - or even the type of player who would be interested - narrow. The areas where little or no movement is needed (or perhaps more accurately, expected) include the bullpen, catcher, second base, third base, and shortstop.

In which areas do you believe the Twins need the most help? Which areas can they afford to not worry about quite so much this season?