The Next Day: My Thoughts

I look to erase any doubts, complaints, and conspiracies towards the obstruction play from last night.

Share All sharing options for: The Next Day: My Thoughts

After the obstruction play that occurred last night, I was getting a little miffed when I saw that it was a dead heat between those that believed the right call was made and those that thought it was a blown call. However, upon checking the poll again today, I see that it's now about a 70/30 split in favor of the right call being made. Nevertheless, I saw a bunch of people that keep pulling out the same arguments as to why it was a bad call, and I'm looking to show that all of those claims are incorrect.

1) It's unclear if Will Middlebrooks had intent with slowing down Allen Craig.

Doesn't matter if Middlebrooks had intent. According to the definition of obstruction in Rule 2.00 of the MLB rule book, intent is not addressed, thus suggesting that it is not necessary for this call.

OBSTRUCTION is the act of a fielder who, while not in possession of the ball and not in the act of fielding the ball, impedes the progress of any runner.

2) Middlebrooks was in the act of catching the ball, thus he cannot be called for obstruction.

The funny thing is that this very thing is addressed in the comment for the definition of obstruction in Rule 2.00. The comment says that yes, a player that is attempting to field a ball is obviously in the act of fielding. However, once the ball is past the fielder, that fielder is no longer ruled as being in the act of catching or fielding the ball. Thus, since Middlebrooks missed the ball, he is now guilty of obstruction with Craig.

If a fielder is about to receive a thrown ball and if the ball is in flight directly toward and near enough to the fielder so he must occupy his position to receive the ball he may be considered "in the act of fielding a ball." It is entirely up to the judgment of the umpire as to whether a fielder is in the act of fielding a ball. After a fielder has made an attempt to field a ball and missed, he can no longer be in the "act of fielding" the ball. For example: an infielder dives at a ground ball and the ball passes him and he continues to lie on the ground and delays the progress of the runner, he very likely has obstructed the runner.

3) Allen Craig was running out of the baseline when he made contact with Middlebrooks.

No, he wasn't. Running out of the baseline is a rule that is only enforced when the runner is attempting to avoid a tag. According to Rule 7.08a(1), the baseline is established when a tag attempt occurs, and the baseline is defined as a straight line from the runner's current position with 3 feet of allowance on either side. If there is no tag attempt, then the runner can go wherever he pleases. I once umpired a middle school league for two summers, and the head of umpiring told us that without a tag attempt, the runner could go all the way to the outfield fence if he wanted and it would be legal. Also think of when a runner reaches 1st base and there's a wild throw. He doesn't retreat to 1st and then take off for 2nd; no, he turns and immediately heads to 2nd, even if he's starting a few feet from the outfield grass.

Any runner is out when — He runs more than three feet away from his base path to avoid being tagged unless his action is to avoid interference with a fielder fielding a batted ball. A runner’s base path is established when the tag attempt occurs and is a straight line from the runner to the base he is attempting to reach safely.

This is so wrong that it's laughable. This picture had been circulating Twitter last night. 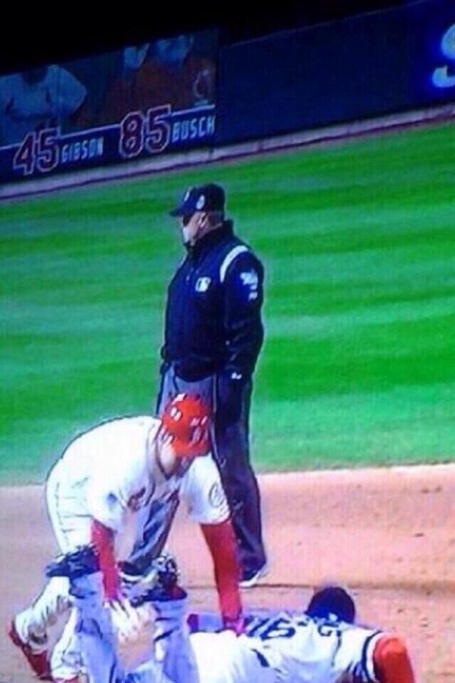 However, checking the video of the play easily showed that Joyce was looking at Craig and Middlebrooks nearly the entire time. He did look away twice, but both times were brief as he was merely checking where the ball had gone, and he then called obstruction right after Craig had tripped. In the GIF below, you can see Joyce point at Middlebrooks, signaling the obstruction call.

5) Since Allen Craig was on the 2nd base side of 3rd when he got up, he had to retouch 3rd base before advancing home.

Umm... what? First off, I am not aware of such a rule. Second, Craig is not on the 2nd base side of 3rd because he's trying to retreat back to 2nd, he's on that side of the base because his momentum while getting up brought him over there. In any other situation where the runner is on the "wrong" side of the base when he gets up, and there is no obstruction in the play, every single time the runner will not be penalized for failing to retouch the base. This felt like Red Sox fans grasping at straws more than anything in an attempt to justify why Craig shouldn't have been safe.

Look, I understand that I'm rooting for the Cardinals this World Series, but really I don't care who wins. The umpires got the call right, and really the Red Sox did a million other things that caused them to lose this game more than this play alone. To blame the umpires is to avoid giving responsibility to Jarrod Saltalamacchia for making the throw, Will Middlebrooks for failing to make the catch, John Farrell for putting Middlebrooks in the game in the first place, and others.