We finally know what we already knew.

Share All sharing options for: CONFIRMED: Duke Welker IS the PTBNL In Justin Morneau Trade, Added to 40-Man Roster

The Twins finally confirmed today that the Player to Be Named Later in the Justin Morneau trade will be 27-year old right-hander Duke Welker. Welker spent all of 2013 in Triple-A (barring two appearances with the Pirates in June), striking out 65 batters in 63 innings and allowing just 53 hits, be he also surrendered 31 walks. 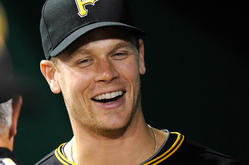 Alex Presley will be in the running for a starting job on Opening Day with the Twins in 2014. His performance down the stretch was one of the few bright spots, and he finished the season hitting .283/.336/.363 in 28 games, accumulating -0.2 Wins Above Replacement according to FanGraphs. Justin Morneau, for what it's worth, hit .260/.370/.312 for -0.1 wins above replacement. So sure, Justin helped the Pirates get to the playoffs, but they also had to pay his salary. Right? It's a push? Right? Minus the emotional gut punch?

Barring something unexpected, Presley will be the favorite to have the center field job on Opening Day, and Welker will have an opportunity to crack the bullpen as well. Simply by virtue of being part of the return on Morneau, even if he doesn't get one of those roster spots out of spring training it's easy to see him being one of the first relief callups when something goes awry.

Welker has been added to the Minnesota 40-man roster, giving them 36 players (not including Samuel Deduno and Wilkin Ramirez, who are on the 60-day disabled list) and four open spots.