The Twins need a couple of bats to help the offense out next season. Here are five players the Twins could target to meet that need.

In the four years of Target Field's existence, one trend that's come to bear is that right-handed hitters who pull for power have an easier time than any other kind of power hitter when it comes to hitting homers. ESPN's Home Run Tracker illustrates that point was still valid in 2013. 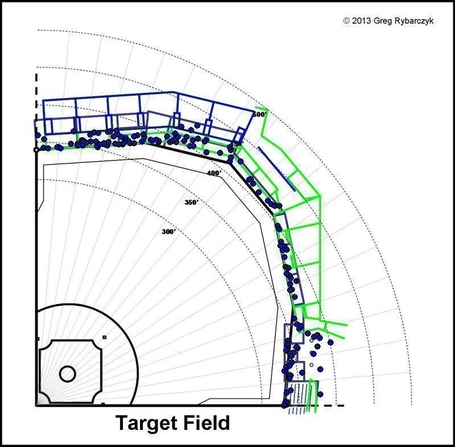 The field is split into 18 zones. The easiest way to split it up is to give six parts of the grid to each of left, center and right fields. While the number of left-handed hitters compared to right-handed hitters should be taken into account, as does the distance and height of each wall, neither of those things change the fact that if you can hit the ball with power to left field then you have a better chance of hitting a home run. Nearly half of Target Field's home runs were hit into the six left field zones.

In 2013, the players who fared the best in pulling to left for power won't come as a surprise. Well, one of them might.

Hicks made the leaderboard in the overall picture, but because he's a switch hitter and we're focusing on pull power I've listed his split as a right-handed hitter. Pinto also doesn't have much to go on, and in fact the whole of his success this season is too small of a sample size off of which to base any kind of judgement about his future, but it doesn't make the success he had this season any less true. It's also a nice illustration of how the Twins really fared in this area in 2013. Or, perhaps, how they didn't fare so well. No other right-handed hitter was worth mentioning.

It's also not a list that inspires a lot of faith or optimism. Two small sample sizes, a second baseman in a breakout season which may or may not be repeatable, a mid-30s outfielder, and a first-round draft pick from nine years ago whose successes always seem to be fleeting.

Let's take a look through the free agent market to see what's available. Our ideal targets are A) right handed, B) have pull power, and C) play a position at which the Twins need help. As for the details on my contract offers, I'm making complete stabs in the dark.

Napoli's days as a catcher are pretty much done. He's been transitioning out of the position since 2010 and didn't play an inning behind the dish in 2013. He'll be 32 next summer, and in spite of the strikeouts is still a productive hitter overall with a .246/.353/.476 triple slash over the last two years. He'll crush righties or lefties.

I know that Mark Reynolds is a little bit of a mess. He has problems making contact, and even his righty-lefty splits from this year don't reveal much other than the fact that he struggled. But he strikes me as a guy who could backup the corner infield spots, and come off the bench late in the game as a power threat. And you know what? He'll be dirt cheap.

Offer: Minor league contract with an invitation to spring training

Hart is going to be a gamble for whoever he signs with. He suffered a season-ending injury to one knee while rehabbing the other after off-season surgery, and has now had three knee surgeries in two years. But he's also among the players on the free agent market with an impressive offensive track record. I'd ink him with the intention of never letting him near the outfield again, and mixing in regular DH days to boot. He'll be 32 on Opening Day.

Uribe is notorious for up and down seasons, so considering he's coming off one of his better ones (.278/.331/.438) and he's coming off what will at the very least be an NLCS appearance, his value will be a little inflated and the Twins would be buying high on a guy who turned 34 in July. On the plus side, he could be a weak platoon option with Plouffe at third base - his career .720 OPS versus righties isn't great, but it's still 55 points better than Plouffe's.

Cruz finished his 50-game suspension at the end of the season, and as a result he and whatever team signs him will be taking on a certain amount of flak. Signing an outfielder also means that Willingham's days as an outfielder are probably over, but that's something looming on the horizon anyway. Cruz turned 33 in July and, in spite of slugging .511 and averaging 27 homers over the last five seasons, may not be as attractive a target as he may have been earlier in the year.

Because pitching is such a priority, the chances of the Twins signing a big bat aren't good by comparison. If they do sign a bat like a Napoli or a Cruz, they're only getting one. Minnesota may have upwards of $40 or $50 million to spend in free agency this season, but most of that will be funneled into the rotation and rightfully so.

How would you feel about any of these players coming to Minnesota on those terms? Would you change anything? Is there another position player you'd like to see the front office take a long, hard look at this winter?