That's right, Colabello could be another Joe Mauer on the roster. I also take a look at what Colabello needs to do to become more productive in 2014.

Share All sharing options for: Chris Colabello: Another Joe Mauer?

Now that you've become significantly outraged after reading the headline and my first sentence, let me explain. No, I am not arguing that Colabello and Mauer are on the same level of ability when it comes to hitting. However, the two of them do have similar styles of batting that I will discuss below.

Just as a quick reminder, Colabello was signed out of the indy leagues prior to the 2012 season. Although he was already 28 years old, he was fairly interesting in that he was a power hitting first baseman. His 2012 year wasn't anything too special considering his age, but then last season he really turned on the jets, having an OPS over 1.000 at Triple-A Rochester. His excellent hitting earned him multiple call-ups to the majors, but his bat didn't travel with him to the Midwest as he hit only .194/.287/.344 with 7 homers in just under 200 plate appearances.

In just a short period of time, two facts became very clear about Colabello. First, he stood about an Altuve away from home plate. Below is an overlay of him with Josh Willingham (Willingham is the one in blue, standing closer to the plate). 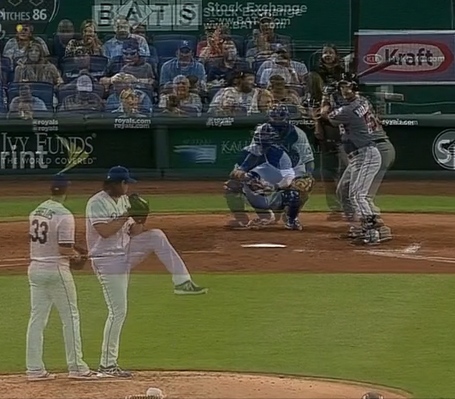 It may not look like much, but those extra couple inches towards home plate for Willingham helped him pull pitches that were over the outer edge of the plate. Colabello, meanwhile, had a much different approach at the dish, and that leads me to the second fact that was obvious from watching him play.

Unlike Willingham, Colabello was much more content with taking pitches that were down the middle and driving them to the opposite field, as shown by the highlight above. In fact, if we take a look at Colabello's spray chart, we notice that all of his home runs from last season save for one were hit to straightaway center field or to the opposite field. 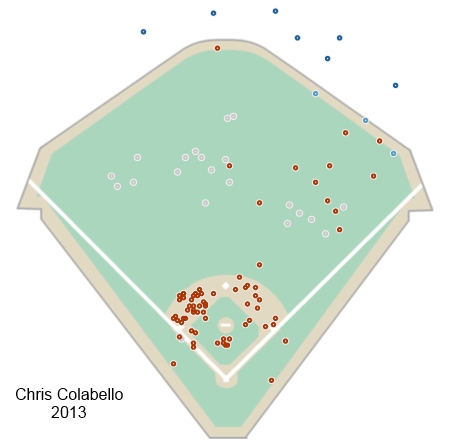 Hmm... something looks pretty interesting in that spray chart. In addition to the power to the opposite field, Colabello also had a ton of outs to the pull side of the infield. Who else on the Twins has opposite field power but is known to some fans for grounding out to his pull side an inexplicable amount of the time? 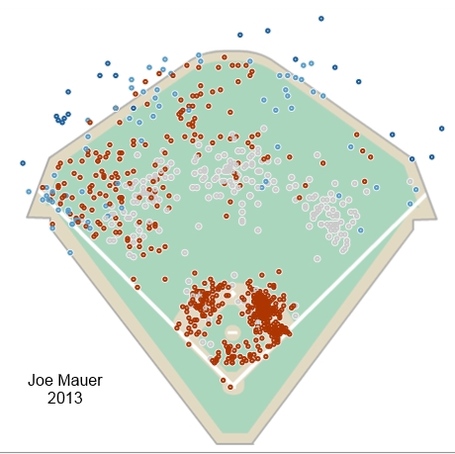 Now, Jesse already wrote about Colabello and his opposite field approach back in September, so I don't want to repeat too much that has already been said. I think it's pretty clear that a player needs to have some big time power in order to hit the ball out to the opposite field, and from Colabello's 7 home runs, he certainly fits the bill... and yet he had only 3 doubles.

That number stood out to me when I was looking over Colabello's numbers from last season. In the minor leagues, he racked up far more two-baggers in addition to the big flies, but he just couldn't seem to find them in the majors. This meant I had to do some digging to figure out an explanation.

Sometimes if a player has a home run barrage in a season, it's his doubles count that suffers, because by luck or skill, those should-have-been doubles become dingers. Trevor Plouffe's 2012 (24 HR and 19 2B) and Mauer's 2009 (28 HR and 30 2B, his 3rd fewest amount of doubles with at least 450 plate appearances in a season) are two examples of players that traded some doubles for home runs in recent Twins history. However, I wasn't convinced that this was Colabello's problem, because something else jumped out to me.

For all the hell Mauer receives for grounding out to 2nd base, his career ground ball percentage is 50%. Okay, yeah that's kind of high, but he combats it with a 23.5% line drive percentage and a 2.1% infield fly percentage, both which rate near the top of the league. However, Mauer is not a power hitter, so let's use Josh Willingham as an example instead. He has a career 36.9% ground ball percentage and 44.1% of his batted balls are flies. This is more indicative of a slugging position player, and that makes sense. Hit more balls in the air, and you're more likely to hit home runs.

That's right, Colabello had a batted ball profile that was closer to speedster Michael Bourn than to slugger Josh Willingham. I think that right there is a huge culprit as to why Colabello struggled in his first taste of the pros last season, and also why he only mustered 3 doubles despite having 7 home runs to his name.

Now, I'm not smart enough to figure out why this was the case, but I think I can make an educated guess. My first thought was that Colabello has a downward swing, but that didn't make sense based off of his slugger profile from the minors. Rather, I think it had something to do with his approach at the plate. Since Colabello was looking to drive the ball to the opposite field, he needed to wait just a hair longer in order to drive the ball to right field. However, if he was given an offspeed pitch or breaking ball, his swing was now geared toward pulling the ball to the left side, and his slight error in timing would cause his bat to drive the ball straight into the ground.

Still, you could argue that this should have been true in the minors as well, unless you want to say that the talent difference between pitchers in Triple-A and the majors is so great that even tossing a few non-fastballs at Colabello wasn't enough to keep him from raking at Rochester last year.

Therefore, I'm stuck with figuring out what to believe. All I know is that I think the easiest way for Colabello to become a productive hitter next year is for him to hit more balls into the air, and the power numbers should increase as well.