While the Twins have plenty of money to spend this offseason, I have another cost-effective method that could improve the team in the future: Utilizing more defensive shifts.

As the 2013 year wraps up and Minnesota gets hit by the first post-summer snowfall, GM Terry Ryan and the Twins are looking at free agents and trades that could help the team improve for 2014 and beyond. Theoretically they have about $20 million or more to spend, but knowing this organization, there is no guarantee that they will actually spend it.

More often than in the past, the Twins often saw a defensive shift from an opponent whenever Joe Mauer or Justin Morneau was batting. Looking at some spray charts, it's easy to see why. 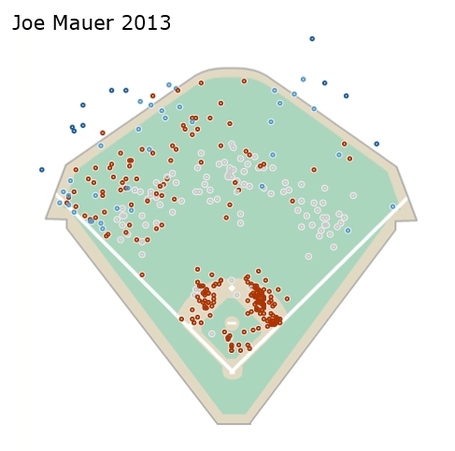 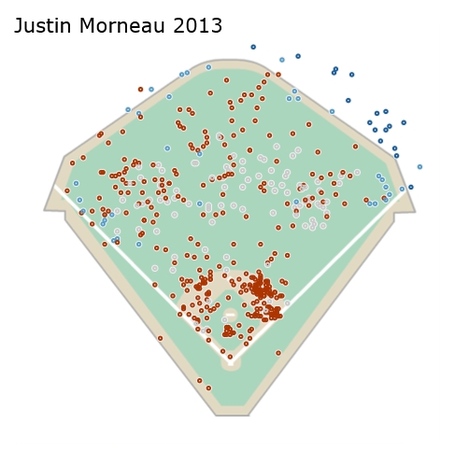 While Mauer's spray chart is fascinating (opposite-field tendencies are noticeable, along with a moat around the entire infield where no balls were fielded), you can see that there is a lot of red over by where the 1st baseman and 2nd baseman normally play. The same is true of Morneau's spray chart. Defenses noticed that these two hitters would often ground the ball to the right side of the infield, and they started defending it by putting an extra defender over to the right side of second base, as if these hitters were Adam Dunn or David Ortiz.

The Twins, however, have not shifted very often and it shows.* They have put together a disastrous combination of pitching and fielding that is not going to lead to a successful team. First, we all are aware of their inability to strike out hitters (6.11 K/9 was the worst in the majors in 2013). Second, their defense only turned 69.1% of batted balls into outs last season, which was second-worst in the league (Rockies were worst at 68.6%). Thus, not only were the Twins allowing more balls in play than any other team, but they were allowing a higher rate of those additional balls to land for hits. Some of the blame can go to the pitching staff, and the Rockies also have the excuse of calling Coors Field home, but part of the equation of turning balls in play into outs falls on the shoulders of the defense.

* I apologize, I do not have numbers to back up this assertion. Feel free to leave your criticism in the comments. However, there is no doubt that during broadcasts, Dick 'Bremer and Bert Blyleven talked more about shifts with the opposing team than with the Twins. Anecdotal, yes, but that's the best I've got right now.

I must admit that this is a bit flawed since the data only goes through the middle of the season, but in July John Dewan posted an article that listed the 5 teams that shifted the most and the 5 that shifted the least. At the top were the Orioles, Pirates, Rays, Yankees, and Red Sox, while the teams that shifted the least were the Phillies, Cardinals, White Sox, Nationals, and Dodgers. Also, while not in the top 5, the Astros have also become a team that has relied on shifting their infield defense around a lot in the past year, although they have received some complaints, but I'll address that in a bit. The same is true with the Milwaukee Brewers.

Aggressive shifting leads to fielders playing in unfamiliar territory, but that also leads the team to record more outs that are classified as "out of zone." This defensive stat doesn't only apply to the times that teams are shifting (for example, Pedro Florimon could earn an out of zone play if he fielded a ball in the hole between shortstop and 3rd base), but can be used as a starting point to see if the defensive shifts truly worked. In 2013, the top 5 teams Dewan listed in July also ranked 2nd, 4th, 10th, 15th, and 17th in out of zone plays. The bottom 5 were at 16th, 21st, 25th, 27th, and 29th.

Well that's great, but it seems pretty obvious that a team that plays a bunch of its fielders out of position will tally a bunch of out of zone plays. This is where the spray charts come back into play. I'll let Brewers manager Ron Roenicke explain it:

"It's always bothered me when, say, a right-handed batter hits one ground ball to the right side and he hits 60 ground balls to the left side, why are we playing two guys on the right side? It doesn't make any sense to me.''

Just like with the Mauer spray chart above, if he's rarely going to hit it to where a third baseman typically is stationed, then why continue playing him there? You're basically defending a part of the field that has a statistically unlikely chance of receiving a ball, which means you're pretty much wasting a fielder. Hence, that was why we often saw 3 fielders on the right of second base, with the third baseman almost playing shortstop against Mauer and Morneau at times last year. Teams were moving their players out of their zone to field more balls, but the spray charts were telling these teams that it was a wise decision.

However, not everyone is in favor of the shifts. Clearly the teams that were in the bottom 5 feel that way, but another segment of dissenters are pitchers. The Baltimore Orioles are among the leaders in defensive shifts, but their closer Jim Johnson is one that is not a fan of the changing defenses. He does offer up a good counterpoint:

If you're shifting on a No. 8 hitter, just because [the numbers] say he grounds out to the right side, and you've got a guy throwing 99 MPH that he's probably not going to turn around, then why are you shifting?"

Johnson points out that if the pitcher isn't pitching the batter in a manner that will benefit the shift, it's not going to work. The Astros have a similar issue with starter Lucas Harrell, who felt that batters will hit the ball to the traditional defensive spots in the infield when his sinker is working. You can make snide remarks that Harrell's sinker wasn't working for most of last year, but there's no denying that there's a human element to the resistance of shifts as well. For example, earlier this year the Red Sox were executing a defensive shift on Yankees second baseman Robinson Cano, with only shortstop Stephen Drew on the left side of 2nd base. Cano decided to keep the defense honest and this is what happened.

I'm sure it infuriated some Red Sox and probably fans as well that if the third baseman had been at his normal spot, this bunt double would have either been a routine groundout or wouldn't have even happened as Cano likely would have been swinging away instead. However, I feel this is the wrong mindset to have when a shift gets beaten. In this case, one would be upset that the Red Sox were not defending against a statistically improbable event (a grounder down the 3rd base line for Cano) while they were gearing themselves for an event with a higher likelihood (a grounder to the right side of second base). As Ron Roenicke said above, why prepare for the play that's going to happen only once in 61 plays? Still, Orioles shortstop J.J. Hardy explains why we worry about that one play:

Now that I've spent most of this article just talking about the pros and cons of shifts, I will relate it back to the Twins. I don't know about you, but I'm still skeptical that they will look for strikeout pitchers to anchor the starting rotation for next year. Therefore, the defense will be taxed again with turning more balls into outs than any other defense. Since defensive shifts were designed to take away parts of the field that see more hit balls than others, it would make sense for the Twins to tell their defenders to start manning those parts of the field.

The nice thing about this change is that theoretically, it will require no funds from the payroll to implement. With Jack Goin on staff in the front office, he could put together spray charts for the coaching staff and provide evidence as to why there should be more shifting on the field. Yes, this requires the front office to be receptive of his ideas, but let's just play along that this could truly happen.

You could argue that some better defensive infielders would make the addition of shifts even more beneficial, but Brian Dozier and Pedro Florimon had solid gloves up the middle last year. Really the only positions that could see improvement are the corner infield spots, but we still don't know who will be taking over 1st base next year and Trevor Plouffe is probably entrenched at 3rd base no matter how many frying pans he brings out with him instead of his glove.

What do you think? Does this sound like a plausible way to help out the pitching staff next year?