Today's B&B post talks about Dirk Hayhurst's newest book, Cuban defectors finally being allowed to return to the island, the Marlins selling team chemistry because they have nothing else to look for, and Trevor Bauer discusses how he throws his vast repertoire of pitches.

Good morning, all. I hope you all were able to make it to TwinsFest last weekend. Even if you're not a fan of autographs, there's plenty to do and see at the Metrodome. I've typically shied away from autographs the past 2 years with the exception of the free minor league line for the big name prospects such as Miguel Sano and Aaron Hicks. There's also plenty of shenanigans going around, such as Drew Butera harassing Trevor Plouffe with a cardboard cutout of Plouffe himself, Mike Pelfrey being introduced to our love of "How's the weather up here?", and me photobombing a newly crowned millionaire. 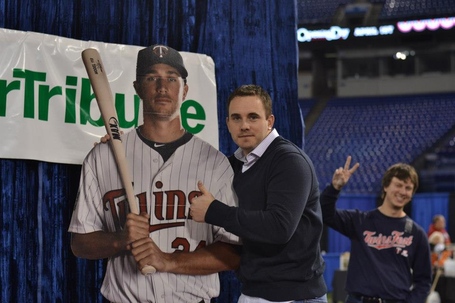 Although I don't go for the paid autographs anymore, this might be worth doing a $15 line next year just to get this picture signed.