Mauer, Willingham, and Escobar each hit solo home runs in an otherwise embarrassing loss to the Royals.

Well, Mike Pelfrey was unable to recreate the solid performance he had against the Tigers last week again tonight for the Twins game against the Royals. Pelfrey lasted all of two innings, giving up six earned runs with 62 total pitches. Perhaps even more embarrassing than Pelfrey's performance, however, was the Twins defense behind him: a ball dropped in left-center filed just out of shortstop Eduardo Escobar's reach; the Royals hit a ball that simply rolled down the third baseline past Trevor Plouffe; Darin Mastroanni dropped and/or failed to catch a ball in center field Aaron Hicks would have had he really should have caught--and all of this was in the bottom of the first inning before even a single Royals out was recorded.

The Royals scored five runs before the first inning was over.

Despite the overly embarrassing play by the Twins in the first couple innings, this was still a win-able game due to a trio of Twins homeruns. The Twins were even able to load the bases with two outs in the ninth and Mauer at the plate, but it was unfortunately too little too late.

The top ten posters in the Official Twinkie Town Game 8 Game Thread are: 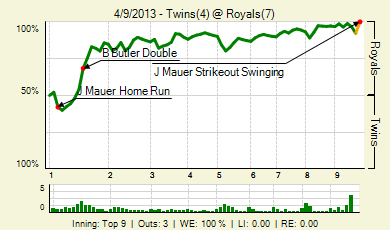