Covering one of the Twins' top ranked prospects and the good week he had. 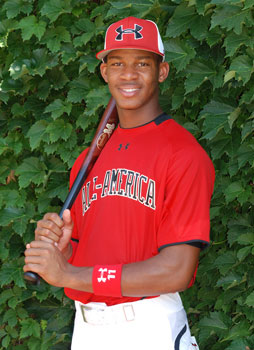 Byron Buxton was the second overall pick in the 2012 draft, and has since been ranked 3rd in the Twinkie Town Top 25 minor league prospects (ranked the Twins second top prospect, according to mlb.com), as much for his offense as defense. Buxton has been an exciting player to keep an eye on, as he has a lot of control at the plate, and is able to make some great plays in the field.

In the games he's played in the last week, Buxton hasn't had an OBP of less that .400. He's gotten a total of 10 hits in just 5 games, going 4-for-5 in the April 7th game against the Beloit Snappers, getting a double and a triple in the process. In the past 5 games, he's also hit 2 home runs, and stolen two bases.

Buxton is a talented five-tool player, and someone Twins fans should be excited for in the upcoming years. He signed a $6 million contract with the team last year, and is expected to be with the big league club in 2016 (potentially sooner, depending on September callups). While Aaron Hicks is holding down CF for the time being, it's safe to say Minnesota should again have an exciting, talented center fielder to watch in the future.