Mike Pelfrey, Anothony Swarzak, and--most importantly--the offense were able to stitch it together.

Pelfrey struggled again, but at least he held it together for five innings this time and earned himself the win. Swarzak came in to pitch 3.1 innings after Pelfrey, and then Perkins came in to shut it down in the ninth.

But the even better story was the offense.

Joe Mauer led the way, going 4 for 5 with three RBIs. Justin Morneau had another important RBI in the 2nd inning to initially put the Twins ahead. Aaron Hicks, moved to the 8th spot, didn't get a hit--but he walked twice, and scored two runs!

The future is bright!

Top posters in the Twinkie Town Game Thread tonight ARE: 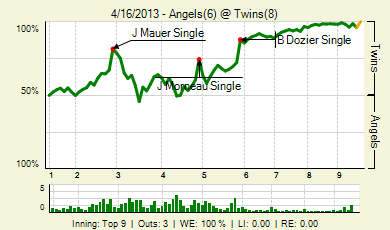