Matt Lindstrom and Donnie Veal had their own issues. So when Jesse Crain took the mound as the third pitcher for the White Sox in the top of the seventh, it's not like what followed could be placed solely on his shoulders. But he was sent out to protect a 2-2 tie with the bases loaded. He didn't do it.

Josh Willingham cut on Crain's first pitch, a hanging breaking ball, and dropped it off the base of the center field wall. Willingham's double cleared the bases, the Twins took a 5-2 lead, and it was a lead they didn't relinquish. If you were at the stop light next to me when Willingham's ball struck the fence, I don't apologize for my behavior. I just don't.

Justin Morneau drew a bases loaded walk to tie the game at one in the sixth. When Chicago scored again in the bottom half of the inning, Aaron Hicks tied it with a single through the right side in the top of the seventh. Four batters later, Willingham took out Crain and the White Sox.

Twins win, and Minnesota is now at 8-7 on the season. 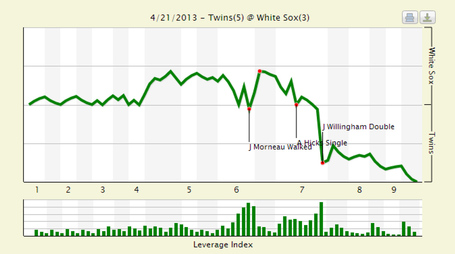