There were two things I noticed about Oswaldo Arcia's three run homer this afternoon. The first was that he didn't even make dead red contact. His swing was strong and he extended his arms, though. The second thing is that the home run landed like a Jim Thome bomb. Arcia destroyed that baseball.

Kevin Correia once again went seven innings, surrendering just two runs off five hits and a walk while striking out five. He continues to excel in cold conditions, and he continues to be one of the league's best pitchers to this point in the season. 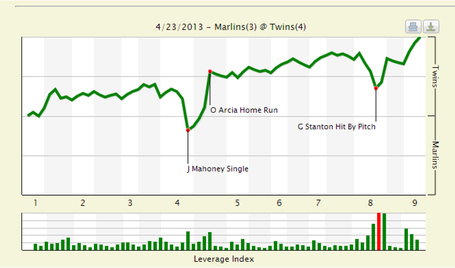