Mike Pelfrey struggled through yet another start tonight, leaving the Twins with an early deficit they were ultimately unable to overcome. The Marlins loaded the bases and scored three runs in the first, and began the second with three straight singles before Pelfrey managed to strike out Placido Polanco for the first out. It was not pretty. It looked like Pelfrey wasn't going to make it out of the second inning, but somehow he escaped with only one earned run and then go on to pitch a couple more innings.

The Twins offense battled back to within striking distance several times, but the early run deficit combined with rough bullpen outings for Anthony Swarzak and Ryan Pressly put the Twins in a hole they weren't able to climb out of. 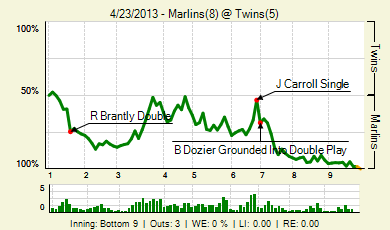