Minnesota blows golden opportunity in the eighth, and drops to .500.

Strategy nearly backfired on Ron Washington and the Texas Rangers tonight. With the Twins trailing 2-1 in the bottom of the eighth, Eduardo Escobar stood on first as the pinch runner for Wilkin Ramirez following his pinch hit Texas League single over Ian Kinsler. With Brian Dozier at the dish the Rangers noticed that he tends to go the other way when he lines one into the outfield, and shifted their outfield way over to right field. David Murphy was standing in the left-center field gap.

Dozier ripped a liner into left field, right into the spot where Murphy would have been had they played Brian straight up. Instead it went for extra bases, leaving Dozier on second and Escobar on third. Joe Mauer was given an intentional pass. Texas chose to pitch to the player who had homered earlier in the game, the only player to have any success all evening, instead of pitching to Mauer with the game potentially on the line.

Willingham went down early before fighting back to a full count, but eventually ground into a 6-4-3 double play. 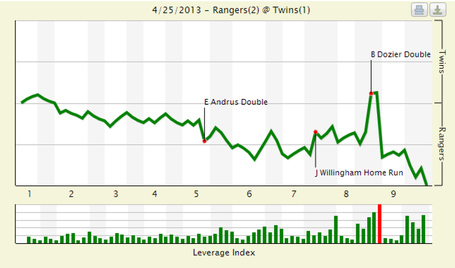