Twins split the series with the Texas Rangers.

On Thursday evening, the Twins nearly came back on the Rangers when their outfield shift didn't work and Brian Dozier slapped one into the right field corner. Today, they tried to shift the infield on Justin Morneau. Who promptly deposited the ball in the right field seats.

Kevin Corriea was the best he's been all season. Eight strong innings, six hits, zero runs. Anytime you blank the Rangers, you've done something right. April or not, Correia was like a Rubik's Cube. Texas sure as hell understood what they were supposed to do with it, but that didn't mean they could. One more time this season, Correia defies the odds. A fantastic start from our maligned free agent. 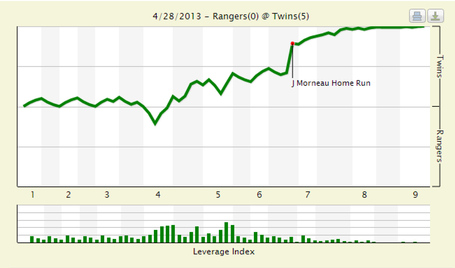